Curious George is the protagonist of a series of popular children's books by the same name, written by H. A. Rey and Margret Rey. The books feature a brown monkey named George, who is brought from his home in Africa by "The Man with The Yellow Hat" to live with him in a giant city.

When the first story, Cecily G. and the Nine Monkeys was published in France in 1939, George was named Fifi. In the United Kingdom, George was originally called "Zozo" in 1941, apparently to avoid using the name of the then King George VI for a monkey. Books featuring the adventures of Curious George have been translated from the original French into many other languages in addition to English. The books have been adapted into several television series and films.

The series was written and drawn by the team of Hans Augusto Rey and Margret Rey. The couple fled Paris in June 1940, on self made bicycles, carrying the Curious George manuscript with them. The Reys produced many other children's books, but the Curious George series was the most popular. Each book has been in continuous print since it was first published. 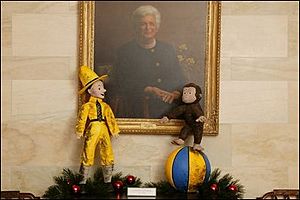 Before appearing in his own series, Curious George appeared as a character in another children's book written and illustrated by H.A. Rey, Cecily G. and the Nine Monkeys (1939).

A third series of books, the Curious George "New Adventures," began to appear in 1998, and continues to the present. These books are "illustrated in the style of H. A. Rey" by a variety of credited and uncredited artists.

The Man with the Yellow Hat 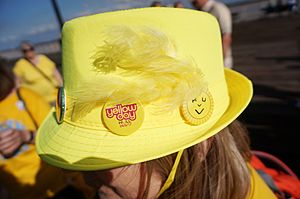 The Man with the Yellow Hat

Aside from George himself, the only recurring character in the original adventures is the unnamed Man with the Yellow Hat. It was he who lured George into a trap with his hat, captured him in a bag, and brought him from Africa, and in his house that George lives. The Man often facilitates George's adventures by taking him somewhere, and even more often resolves the tension by intervening just in time to get George out of a tight spot. He is always seen wearing a bright yellow suit and a wide brimmed yellow hat. The Man is never mentioned by name in the original adventures or in any subsequent content over more than six decades.

He is always called either "The Man" or fully "The Man with the Yellow Hat". When people speak to George about the Man, they often refer to him as "Your friend", though the Man acts more like a father to George. However, in Curious George (2006), the Man, who is voiced by Will Ferrell, is referred to as "Ted" throughout the film, and his last name is revealed as being "Shackleford" in a deleted scene.

There was a series of animated television films made (beginning in 1980) featuring the character, which were then adapted into books themselves (making up part of the New Adventures series listed above). This series was produced and co-written by Alan Shalleck.

A series of Curious George animated shorts were aired on The Disney Channel as a segment on the program Lunch Box from the late 1980s into the 1990s. On Playhouse Disney, Jack Duffy narrated a 2D animated story version of Curious George which had different episodes from the book series that were written by H.A. Rey and Margret Rey.

An animated film, Curious George, featuring Will Ferrell as the voice of the originally unnamed Man With the Yellow Hat, was released on February 10, 2006. In this film (in which The Man is referred to as "Ted"), Curious George secretly follows The Man onto the ship to the city on his own accord. Frank Welker provided the vocal effects of Curious George.

On March 2, 2010, a direct to video sequel to the film was released, titled Curious George 2: Follow That Monkey!, which featured Jeff Bennett replacing Ferrell as the voice of the Man. Bennett also provides the Man's voice in the television series. The second direct to video sequel, Curious George 3: Back to the Jungle, was released on June 23, 2015.

A live action/computer animated film was in development at Illumination Entertainment in the beginning of the 2010s. In August 2016, it was reported that Andrew Adamson was in negotiations to direct, co write and executive produce a live action film for Universal Pictures, along with Ron Howard, Brian Grazer, David Kirschner, Jon Shapiro and Erica Huggins producing.

There is also a Curious George video game that was released on February 2, 2006, published by Namco and developed by Monkey Bar Games, a division of Vicious Cycle Software for Microsoft Windows, Xbox, GameCube, PlayStation 2, and Game Boy Advance. It was supposed to be released on Nintendo DS but it was cancelled. 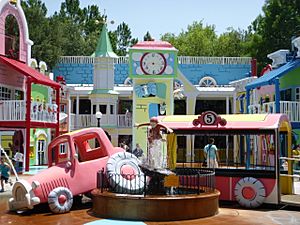 VEE Corporation, the company behind Sesame Street Live, is mounting Curious George Live. It is a brand new national tour featuring song and dance and Curious George himself. It is based on the PBS animated series.

Curious George is used as the theme for children's play areas and some of the children's entertainment on the Stena Line ferries. On some peak time sailings this includes a Curious George costumed character. Curious George merchandise is also provided with children's meals and is available to purchase in the on-board shop.

In February 2006, the Curious George brand joined with Welch's jelly for a collectible of six jars. In the latter part of that decade (when the new film and the new television show were released), licensing deals for the character generally involved less upscale, more kid focused products. Earlier, Vivendi Universal (now NBCUniversal) had, for a short time, embraced the use of the character in a series of 2001 adverts for the company (but the character never officially became a corporate mascot).

In the film Forrest Gump of 1994, one edition of Curious George (one with a yellow cover but no other title than Curious George) is used as Forrest's favorite book, which his mother reads to him. In the opening scene a feather comes floating down to Forrest's feet and he stores it in this book. At the end of the film it falls out of the book and rises floating through the air again.

All content from Kiddle encyclopedia articles (including the article images and facts) can be freely used under Attribution-ShareAlike license, unless stated otherwise. Cite this article:
Curious George Facts for Kids. Kiddle Encyclopedia.