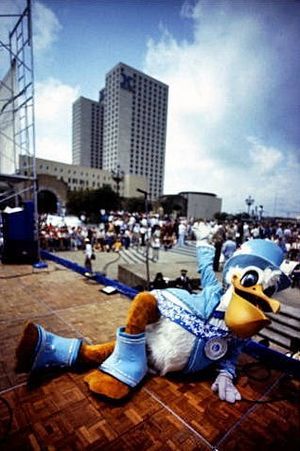 Costumed characters are intended to add to the fantasy experience by enabling visitors to encounter and interact with fictional characters, such as mascots for a company or organization. The characters are portrayed by employees in costume. Some of the costumes merely consist of clothing and makeup, while those for non-human characters generally conceal the performer entirely and include a full-head/body mask. A longstanding policy in most well known theme parks is that the first category of characters, where the performer's face remains visible ("face" characters) are allowed to speak (usually on the basis of scripts carefully prepared in advance), while the second category of characters, where the face is covered ("fur" characters) are not allowed to speak, but can make a kissing sound, and can only communicate through pantomime.

An interesting phenomenon regularly seen with costumed characters, especially "fur" characters, is that young children can become very scared at first sight, when they belatedly realize a character they may have seen only on television or in a book is much larger in person.

For human characters based on a well-known media franchise that speak with visitors, theme park operators may prepare detailed scripts covering a variety of questions regularly asked by visitors, especially young children who have difficulty distinguishing between reality and fantasy. Performers cast in those roles are required to memorize and rehearse those scripts as part of their training, so they can learn their characters' backstories by heart and consistently respond in character to visitors.

At the largest theme parks, popular costumed characters are often accompanied by one or more assistants in regular park uniforms, who handle customer service, security, and crowd control. This minimizes the necessity for performers to break character to deal with those kinds of issues. When a performer really needs a break, they simply give a prearranged signal, and their handler will then assure patrons the character will be back momentarily.

All theme park operators that present costumed characters enforce strict character performance regulations so that performers are never seen out of character by visitors. In the case of more elaborate costumes, they are never seen "with their head off." A related rule is that performers costumed as the same character (normally to allow the other to go on break) are supposed to avoid being seen side-by-side by the public.

Animegao (アニメ顔code: ja is deprecated , anime face) is a type of kigurumi used to portray anime or cartoon characters. The face of the performer is fully covered with a stylized mask, and clothing similar to the character's typical attire is used. Animegao costumes are used both in professional stage shows and by cosplayers, sometimes called "dollers", who make custom masks of various characters. It is still a very minor part of the cosplay scene in Japan, though around 2005, it began attracting attention in other countries, including the United States, Canada, and European countries.

In recent years, amateur performers wearing unauthorized, counterfeit costumes of various pop-culture characters have appeared in popular tourist destinations such as Hollywood Boulevard and Times Square. They usually pose for photos and collect (or, often, extort) tips from tourists. The 2007 documentary film Confessions of a Superhero focuses on costumed "superheroes" on the Hollywood Walk of Fame. Because they are not regulated or authorized, there have been many controversies and arrests involving costumed characters in Times Square.

The mascot industry is estimated at $5-million a year. Toronto, Canada, is one of the hubs in the industry, with six major firms headquartered out of the city. Knock-off costumes are fabricated in, among other places, Peru.

All content from Kiddle encyclopedia articles (including the article images and facts) can be freely used under Attribution-ShareAlike license, unless stated otherwise. Cite this article:
Costumed character Facts for Kids. Kiddle Encyclopedia.