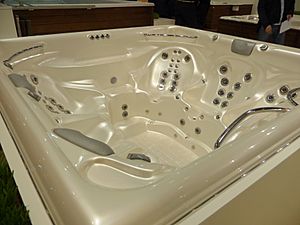 A 5-seat hot tub with a cast acrylic shell, supported by a frame structure, showing vents for water circulation and massage 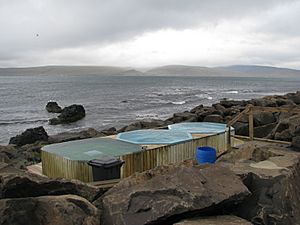 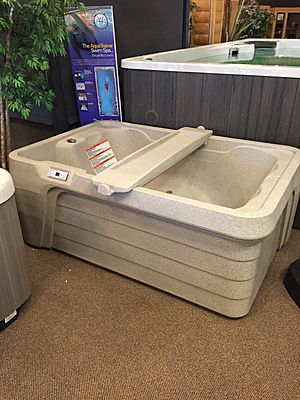 A hot tub is a large tub or small pool full of water used for hydrotherapy, relaxation or pleasure. Some have powerful jets for massage purposes. Hot tubs are sometimes also known as spas or by the trade name Jacuzzi.

In contrast to a typical bathtub, a hot tub is designed to be used by more than one person at a time, with many models accommodating four or more people. Hot tubs are usually located outdoors, although they can be installed indoors. Also, the water in a hot tub is not changed with each use, but is kept sanitary using methods similar to those used for swimming pool sanitation. Another difference between baths and hot tubs is that soaps and shampoos are not used in wet-jetted hot tubs (although they can be used in air-jetted hot tubs).

The earliest hot tubs were calderas in which hot stones were placed to heat the water. Therma in Ikaria has been a very popular place particularly for hydrotherapy ever since the 4th century BC. The remains of wrecked marble bathtubs along with a pre-historic aqueduct that have been unearthed from this area bear ample testimony of the place’s popularity in the ancient times.

In ancient Rome there were three types of baths: baths at home (balnea), private baths (balnea privata), and public baths (balnea publica). The practice of bathing was so engrained that the Roman legions, during their long occupations in foreign lands, built their own baths at mineral and thermal springs in the newly conquered lands. Examples are found all over Europe.

After the fall of the Roman Empire in 476 and the rise of Christianity, cleanliness was abandoned since the Church considered that the practice of bathing a prelude to forbidden behaviour. At Cluny custom required monks to take a full bath at Christmas and Easter. Private bath-rooms in castles, such as the one at Leeds, could often accommodate multiple bathers. From the 13th century onwards, baths gradually came into re-use, particularly in southern Europe under the influence of the Moors.

In the 1940s hot tubs began to appear in the USA, inspired by the Japanese ofuro. Hydrotherapy pumps were introduced by Jacuzzi. Fiberglass shell hot tubs appeared around 1970 and were soon superseded by cast acrylic shells.

All content from Kiddle encyclopedia articles (including the article images and facts) can be freely used under Attribution-ShareAlike license, unless stated otherwise. Cite this article:
Hot tub Facts for Kids. Kiddle Encyclopedia.