Aqaba is the only city on Jordan's coast. For this reason, it is a very important port city for the country. It is also the largest city on the Gulf of Aqaba. During World War I, T.E. Lawrence lead Arab rebels across the Arabian Desert to attack and capture the city, which was controlled by the Ottoman Empire then. This was known as the Battle of Aqaba. 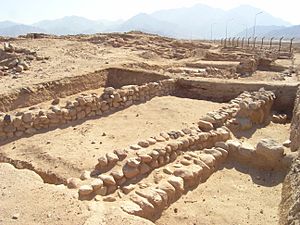 Excavations in Aqaba show the city has been inhabited since 4000 BC. It had then a thriving copper production industry. Copper is the main constituent of the alloy bronze, the key metal for making weapons during the bronze age.

All content from Kiddle encyclopedia articles (including the article images and facts) can be freely used under Attribution-ShareAlike license, unless stated otherwise. Cite this article:
Aqaba Facts for Kids. Kiddle Encyclopedia.