Frogfishes are any member of the anglerfish family Antennariidae, of the order Lophiiformes. Antennariids are known as anglerfish in Australia, where the term "frogfish" refers to members of the unrelated family Batrachoididae. Frogfishes are found in almost all tropical and subtropical oceans and seas around the world, the primary exception being the Mediterranean Sea.

Frogfishes are small, short and stocky, and sometimes covered in spinules and other appendages to aid in camouflage. The camouflage aids in protection from predators and enables them to lure prey. Many species can change colour; some are covered with other organisms such as algae or hydrozoa. In keeping with this camouflage, frogfishes typically move slowly, lying in wait for prey, and then striking extremely rapidly, in as little as 6 milliseconds.

Frogfishes live in the tropical and subtropical regions of the Atlantic and Pacific, as well as in the Indian Ocean and the Red Sea. Their habitat lies for the most part between the 20 °C isotherms, in areas where the surface level water usually has a temperature of 20 °C (68 °F) or more. They extend beyond the 20 °C isotherms in the area of the Azores, Madeira and the Canary Islands, along the Atlantic coast of the United States, on the south coast of Australia and the northern tip of New Zealand, coastal Japan, around Durban, South Africa, and at Baja California, Mexico. The greatest diversity of species is in the Indo-Pacific region, with the highest concentration around Indonesia. In the small Lembeh Strait, north-east of Sulawesi, divers have found 9 different species. Frogfish live generally on the ocean floor around coral or rock reefs, at most to 100 m (330 ft) deep.

A few exceptions to these general limits are known. The brackishwater frogfish is at home in ocean waters as well as brackish and fresh water around river mouths. The sargassum fish lives in clumps of drifting sargassum, which often floats into the deeper ocean and has been known to take the sargassum fish as far north as Norway. 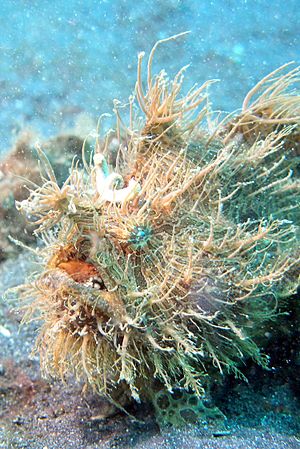 A striated frogfish, with upturned mouth, very distinct spinules, and esca in the form of a white worm 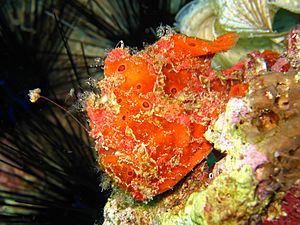 A frogfish in Mactan, Philippines

Frogfishes have a stocky appearance, atypical of fish. Ranging from 2.5–38 cm (0.98–14.96 in) long, their plump, high-backed, unstreamlined body is scaleless and bare, often covered with bumpy, bifurcated spinules. Their short bodies have between 18 and 23 vertebrae and their mouths are upward-pointed with palatal teeth. They are often brightly coloured, white, yellow, red, green, or black or spotted in several colours to blend in with their coral surroundings. Coloration can also vary within one species, making it difficult to differentiate between them.

Rather than typical dorsal fins, the front-most of the three fins is called the illicium or "rod" and is topped with the esca or "lure". The illicium often has striped markings, while the esca takes a different form in each species. Because of the variety of colours even within a single species, the esca and illicium are useful tools to differentiate among different varieties. Some of them resemble fish, some shrimp, some polychaetes, some tubeworms, and some simply a formless lump; one genus, Echinophryne, has no esca at all. Despite very specific mimicry in the esca, examinations of stomach contents do not reveal any specialized predation patterns, for example, only worm-eating fish consumed by frogfishes with worm-mimicking esca. If lost, the esca can be regenerated. In many species, the illicium and esca can be withdrawn into a depression between the second and third dorsal fins for protection when they are not needed.

Frogfish have small, round gill openings behind their pectoral fins. With the exception of Butler's frogfish and the rough anglerfish, frogfish use a gas bladder to control their buoyancy. 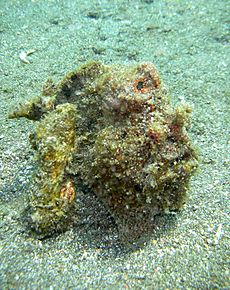 A frogfish disguised as an algae-covered stone

The unusual appearance of the frogfish functions to conceal it from predators and sometimes to mimic a potential meal to its prey. In the study of animal behavior, this is known as aggressive mimicry. Their unusual shape, colour, and skin textures disguise frogfish. Some resemble stones or coral, while others imitate sponges or sea squirts with dark splotches instead of holes. In 2005, a species was discovered, the striated frogfish, that mimics a sea urchin, while the sargassumfish is coloured to blend in with the surrounding sargassum. Some frogfish are covered with algae or hydrozoa. Their camouflage can be so perfect that sea slugs have been known to crawl over the fish without recognizing them.

For the scaleless and unprotected frogfish, camouflage is an important defense against predators. Some species can also inflate themselves, like pufferfish, by sucking in water in a threat display. In aquaria and in nature, frogfish have been observed, when flushed from their hiding spots and clearly visible, to be attacked by clownfish, damselfish, and wrasses, and in aquaria, to be killed.

Many frogfishes can change their colour. The light colours are generally yellows or yellow-browns, while the darker are green, black, or dark red. They usually appear with the lighter color, but the change can last from a few days to several weeks. What triggers the change is unknown. 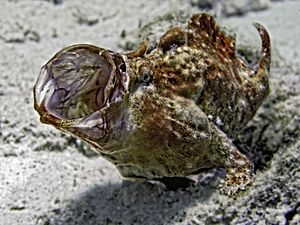 Frogfishes generally do not move very much, preferring to lie on the sea floor and wait for prey to approach. Once the prey is spotted, they can approach slowly using their pectoral and pelvic fins to walk along the floor. They rarely swim, preferring to clamber over the sea bottom with their fins in one of two "gaits". In the first, they alternately move their pectoral fins forward, propelling themselves somewhat like a two-legged tetrapod, leaving the pelvic fins out. Alternately, they can move in something like a slow gallop, whereby they move their pectoral fins simultaneously forward and back, transferring their weight to the pelvic fins while moving the pectorals forward. With either gait, they can cover only short stretches.

In open water, frogfishes can swim with strokes of the caudal fin. They also use jet propulsion, often used by younger frogfish. It is achieved by rhythmically gulping water and forcing it out through their gill openings, also called opercular openings, which lie behind their pectoral fins.

The sargassum frogfish has adapted fins which can grab strands of sargassum, enabling it to "climb" through the seaweed. 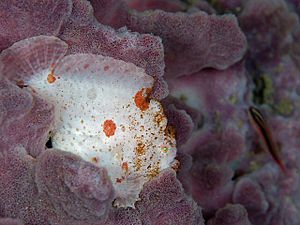 A spotfin frogfish waiting amid the coral

Frogfishes eat crustaceans, other fish, and even each other. When potential prey is first spotted, the frogfish follows it with its eyes. Then, when it approaches within roughly seven body-lengths, the frogfish begins to move its illicium in such a way that the esca mimics the motions of the animal it resembles. As the prey approaches, the frogfish slowly moves to prepare for its attack; sometimes this involves approaching the prey or "stalking", while sometimes it is simply adjusting its mouth angle. The catch itself is made by the sudden opening of the jaws, which enlarges the volume of the mouth cavity up to 12-fold, pulling the prey into the mouth along with water. The attack can be as fast as 6 milliseconds. The water flows out through the gills, while the prey is swallowed and the esophagus closed with a special muscle to keep the victim from escaping. In addition to expanding their mouths, frogfish can also expand their stomachs to swallow animals up to twice their size.

Slow-motion filming has shown that the frogfish sucks in its prey in just six milliseconds, so fast that other animals cannot see it happen.

The female striated frogfish does not tolerate the smaller male after fertilization, and may eat him if he stays close.

The reproductive behavior of the normally solitary frogfish is still not fully researched. Few observations in aquaria and even fewer from the wild have been made. Most species are free-spawning, with females laying the eggs in the water and males coming in behind to fertilize them. From eight hours to several days before the egg-laying, the abdomen of the female starts to swell as up to 180,000 eggs absorb water. The male begins to approach the female around two days before the spawning. Whether the spawn is predetermined by some external factor, such as the phase of the moon, or if the male is attracted to a smell or signal released by the female, is unknown. In all hitherto observed breeding pairs, one partner was noticeably larger than the other, sometimes as much as 10 times. When the gender could be determined, the larger partner was always the female.

During the free-spawning courtship ritual, the male swims beside and somewhat behind the female, nudges her with his mouth, then remains near her cloaca. Just before the spawning, the female begins to swim above the ocean floor toward the surface. At the highest point of their swim, they release the eggs and sperm before descending. Sometimes, the male pulls the eggs out of the female with his mouth. After mating, the partners depart quickly as otherwise the smaller male would likely be eaten. A few species are substrate-spawners, notably the genera Lophiocharon, Phyllophryne, and Rhycherus, which lay their eggs on a solid surface, such as a plant or rock. Some species guard their eggs, a duty assigned to the male in almost all species, while most others do not. Several species practice brood carrying, for example the three-spot frogfish, whose eggs are attached to the male, and those in the genus Histiophryne, whose brood are carried in the pectoral fins.

The eggs are 0.5–1 mm (0.020–0.039 in) in diameter and cohere in a gelatinous mass or long ribbon, which in sargassumfish are up to a metre (3.3 ft) long and 16 cm (6.5 in) wide. These egg masses can include up to 180,000 eggs. For most species, the eggs drift on the surface. After two to five days, the fish hatch and the newly hatched alevin are between 0.8 and 1.6 mm (0.031 and 0.063 in) long. For the first few days, they live on the yolk sac while their digestive systems continue to develop. The young have long fin filaments and can resemble tiny, tentacled jellyfish. For one to two months, they live planktonically. After this stage, at a length between 15 and 28 mm (0.59 and 1.10 in), they have the form of adult frogfish and begin their lives on the sea floor. Young frogfish often mimic the coloration of poisonous sea slugs or flatworms.

Very few fossil remains of frogfishes have been found. In the northern Italian formation at Monte Bolca, formed from the sedimentation of the Tethys Ocean in the middle Eocene (45 million years ago), a 3-cm (1.2 in) fossil named Histionotophorus bassani was initially described as a frogfish, but was later thought to belong to the closely related extant genus Brachionichthys or handfish. In 2005, a fossil from Miocene Algeria (3 to 23 million years ago), Antennarius monodi, is the first proven fossil frogfish, believed to be most closely related to the extant Senegalese frogfish. In 2009, a new fossil from the upper Ypresian Stage of the early Eocene found in Monte Bolca, Italy was described as a new species, Eophryne barbuttii, and is the oldest known member of the family.

Frogfishes belong to the order Lophiiformes, commonly known as anglerfish, which is a member of the superorder Paracanthopterygii with four other orders. They belong to the infraclass Teleostei, the bony fishes, in the class Actinopterygii. There are two subfamilies, Antennariinae and Histiophryninae, which differ in their distribution and reproductive method.

All content from Kiddle encyclopedia articles (including the article images and facts) can be freely used under Attribution-ShareAlike license, unless stated otherwise. Cite this article:
Frogfish Facts for Kids. Kiddle Encyclopedia.