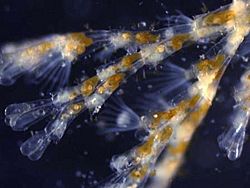 Close-up of a hydrozoan colony 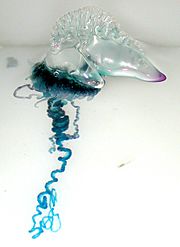 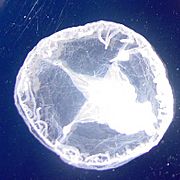 The Hydrozoa are a class of the phylum Cnidaria. They are small predatory animals which mostly live in the sea. Their basic life form is the polyp. Some species live singly, others live in colonies. Their classification and evolutionary relationships are still under discussion. The hydroids may be best understood by taking some examples.

The most widely-known freshwater hydrozoan is Hydra, which is found in slow-moving waters.

It is sessile, with a pedal disc which attaches it to substrate. Like all cnidarians, Hydra uses nematocysts, stinging cells which disable its prey. Hydra eat small crustaceans (such as brine shrimp), insect larvae, and annelid worms. It may reproduce sexually, or by asexual reproduction (budding).

The Portuguese Man o' War, Physalia physalis, is a large colonial marine jellyfish. It is composed of many tiny individual zooids, which are specialised polyps and medusae. The colony has an air bladder, and floats on the surface. It delivers a massive sting to its prey. Humans, if stung, may require medical attention. It is often accompanied by fish which are immune to the stings. This type of hydrozoan is called a siphonophore.

The chondrophores are another type of pelagic colonial hydrozoan. They are also carnivores, but their sting is not so harmful to humans.

These have a muscular velum on the ventral surface, which allows them to move about. Beginning life as a tiny polyp, attached to vegetation, they feed and reproduce sexually in the spring and summer. If the habitat has only one sex, they reproduce by budding. They overwinter as resting bodies.

Nowadays the Hydrozoa is split into two subclasses:

All content from Kiddle encyclopedia articles (including the article images and facts) can be freely used under Attribution-ShareAlike license, unless stated otherwise. Cite this article:
Hydrozoa Facts for Kids. Kiddle Encyclopedia.