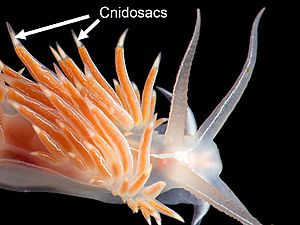 A cnidocyte is an explosive cell containing one giant secretory organelle or cnidae that defines the phylum Cnidaria (corals, sea anemones, hydrae, jellyfish, etc.). Cnidae are used for prey capture and defense from predators. Despite being morphologically simple, lacking a skeleton and usually being sessile, cnidarians prey on fish and crustaceans. A cnidocyte fires a structure that contains the toxin, from a characteristic sub-cellular organelle called a cnidocyst (also known as a cnida or nematocyst). This is responsible for the stings delivered by jellyfish.

There are three main types of cnidae: nematocysts, ptychocysts, and spirocysts, with many variations. Depending on the species, one or more types may be on the organism.

The cell which produces the cnida is variously called a cnidocyte, cnidoblast, or nematocyte. It is highly specialised for just one function. Each nematocyte cell contains an organelle with a hollow, coiled, thread-like structure. The outside of the cell has a hair-like trigger. When the trigger is touched, the shaft of the cnidocyst fires like a harpoon. It penetrates the prey, and the hollow thread comes with it. This takes no more than a few microseconds. After penetration, the toxic content of the nematocyst is injected into the target. The rapid activity of the injected neurotoxins paralyzes the mobile prey, thus allowing the sessile cnidarian to devour it.

Certain types of sea slugs, such as the nudibranch aeolids, store nematocysts from digested jellyfish at the tips of their cerata (body projections). It is quite common for predators to store useful plastids from their victims.

Nematocysts are very efficient weapons. A single nematocyst has been shown to suffice in paralyzing a small arthropod (Drosophila larva).

The most deadly cnidocytes (to humans, at least) are found on the body of a box jellyfish. One member of this family, the sea wasp, Chironex fleckeri, is "claimed to be the most venomous marine animal known," according to the Australian Institute of Marine Science. It can cause excruciating pain to humans, sometimes followed by death.

Other cnidarians, such as the jellyfish (Portuguese Man o' War, "Bluebottle") can cause extremely painful and sometimes fatal stings.

Venom from animals such as cnidarians, a substance that is weakly toxic for humans or other mammals may be strongly toxic to the natural prey or predators of the venomous animal. Such specificity has been used to create new medicines and bio-insecticides.

All content from Kiddle encyclopedia articles (including the article images and facts) can be freely used under Attribution-ShareAlike license, unless stated otherwise. Cite this article:
Cnida Facts for Kids. Kiddle Encyclopedia.