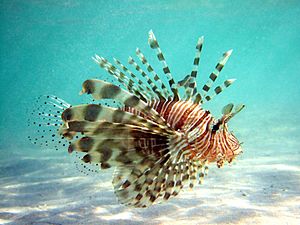 There are currently 12 recognized species in this genus:

Pterois fish in the Atlantic range from 5 to 45 cm (2.0 to 17.7 in) in length, weighing from 0.025 to 1.3 kg (0.055 to 2.866 lb). They are well known for their ornate beauty, venomous spines, and unique tentacles. Juvenile lionfish have a unique tentacle located above their eye sockets that varies in phenotype between species. The evolution of this tentacle is suggested to serve to continually attract new prey; studies also suggest it plays a role in sexual selection.

Pterois species can live from 5 to 15 years and have complex courtship and mating behaviors. Females release two mucus-filled egg clusters frequently, which can contain as many as 15,000 eggs. Studies on Pterois reproductive habits have increased significantly in the past decade. All the species are aposematic: they have conspicuous coloration with boldly contrasting stripes and wide fans of projecting spines, advertising their ability to defend themselves. 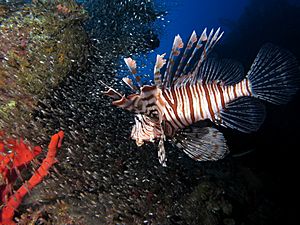 According to a study that involved the dissection of over 1,400 lionfish stomachs from Bahamian to North Carolinian waters, Pterois fish prey mostly on small fish, invertebrates, and mollusks in large amounts, with some specimens’ stomachs containing up to six different species of prey. The amount of prey in lionfish stomachs over the course of a day suggests lionfish feed most actively from 7:00–11:00 a.m., and decrease feeding throughout the afternoon. Lionfish are skilled hunters, using specialized bilateral swim bladder muscles to provide precise control of location in the water column, allowing the fish to alter its center of gravity to better attack prey. The lionfish then spreads its large pectoral fins and swallows its prey in a single motion. They blow jets of water while approaching prey, apparently to disorient them. In addition to confusing prey, these jets of water also alter the orientation of the prey so that the smaller fish is facing the lionfish. This results in a higher degree of predatory efficiency as head-first capture is easier for the lionfish. (In general, when smaller fishes escape from possible danger, they do so against the current.)

Aside from instances of larger lionfish individuals engaging in cannibalism on smaller individuals, adult lionfish have few identified natural predators, likely from the effectiveness of their venomous spines. Moray eels (family Muraenidae), bluespotted cornetfish (Fistularia commersonii), and large groupers, like the tiger grouper (Mycteroperca tigris) and Nassau grouper (Epinephelus striatus), have been observed preying on lionfish. It remains unknown, however, how commonly these predators prey on lionfish. Sharks are also believed to be capable of preying on lionfish with no ill effects from their spines. Park officials of the Roatan Marine Park in Honduras have attempted to train sharks to feed on lionfish as of 2011 in an attempt to control the invasive populations in the Caribbean. The Bobbit worm, an ambush predator, has been filmed preying upon lionfish in Indonesia. Predators of larvae and juvenile lionfish remain unknown, but may prove to be the primary limiting factor of lionfish populations in their native range.

Parasites of lionfish have rarely been observed and are assumed to be infrequent. They include isopods and leeches.

Lionfish are known for their venomous fin rays, an uncommon feature among marine fish in the East Coast coral reefs. The potency of their venom makes them excellent predators and hazardous to fishermen and divers. Pterois venom produced negative inotropic and chronotropic effects when tested in both frog and clam hearts and has a depressing effect on rabbit blood pressure. These results are thought to be due to nitric oxide release. In humans, Pterois venom can cause systemic effects such as extreme pain, nausea, vomiting, fever, breathing difficulties, convulsions, dizziness, redness on the affected area, headache, numbness, paresthesia (pins and needles), heartburn, diarrhea, and sweating. Rarely, such stings can cause temporary paralysis of the limbs, heart failure, and even death. Fatalities are common in very young children, the elderly, those with a weak immune system, or those who are allergic to their venom. Their venom is rarely fatal to healthy adults, but some species have enough venom to produce extreme discomfort for a period of several days. However, Pterois venom is a danger to allergic victims as they may experience anaphylaxis, a serious and often life-threatening condition that requires immediate emergency medical treatment. Severe allergic reactions to Pterois venom include chest pain, severe breathing difficulties, a drop in blood pressure, swelling of the tongue, sweating, runny nose, or slurred speech. Such reactions can be fatal if not treated.

Lionfish are edible if prepared correctly (see below). 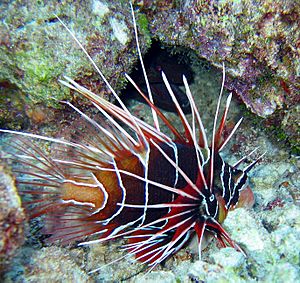 Pterois radiata is endemic to the Indian Ocean and Western Pacific.

The lionfish is a predator native to the Indo-Pacific. It aggressively preys on small fish and invertebrates. They can be found around the seaward edge of reefs and coral, in lagoons, and on rocky surfaces commonly to 50 m deep, although lionfish have on multiple occasions been recorded to 300 m depth. They show a preference for turbid inshore areas and harbors, and have a generally hostile attitude and are territorial towards other reef fish. Many universities in the Indo-Pacific have documented reports of Pterois aggression towards divers and researchers. P. volitans and P. miles are native to subtropical and tropical regions from southern Japan and southern Korea to the east coast of Australia, Indonesia, Micronesia, French Polynesia, and the South Pacific Ocean. P. miles is also found in the Indian Ocean, from Sumatra to Sri Lanka and the Red Sea.

All content from Kiddle encyclopedia articles (including the article images and facts) can be freely used under Attribution-ShareAlike license, unless stated otherwise. Cite this article:
Pterois Facts for Kids. Kiddle Encyclopedia.