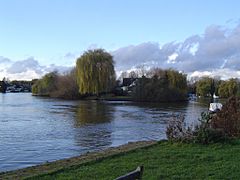 Pharaoh's Island is an island on the River Thames, in Surrey, England.

The island is above Shepperton Lock. It can only be reached by boats.

The island was given to Admiral Nelson as a reward for winning Battle of the Nile, and he used it as a place to fish.

All content from Kiddle encyclopedia articles (including the article images and facts) can be freely used under Attribution-ShareAlike license, unless stated otherwise. Cite this article:
Pharaoh's Island Facts for Kids. Kiddle Encyclopedia.