Gulf of Aqaba facts for kids 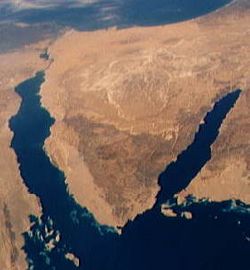 the Gulf of Eilat with the Red Sea from a satellite

The Gulf of Aqaba (Arabic: خليج العقبة‎code: ar is deprecated , transliterated: Khalyj al-'Aqabah) or Gulf of Eilat (Hebrew: מפרץ אילת, transliterated: Mifratz Eilat) is a wide gulf between the Sinai Peninsula in Egypt and west of the Arabian Peninsula in Saudi Arabia. The gulf is an extension of the Red Sea. It is 170 kilometres (110 mi) long and 26 km (16 mi) wide. At this northern end of the Gulf are three cities: Taba in Egypt, Eilat in Israel, and Aqaba in Jordan.

All content from Kiddle encyclopedia articles (including the article images and facts) can be freely used under Attribution-ShareAlike license, unless stated otherwise. Cite this article:
Gulf of Aqaba Facts for Kids. Kiddle Encyclopedia.