Socks was an adopted stray cat and the only pet of the Clintons during the first years of Clinton's presidency. A picture of Socks was always on the children's White House website. After Clinton left office, Socks went to live with Clinton's secretary, Betty Currie and her husband. This was because Socks fought a lot with the Clinton family dog Buddy. Socks never got along with the dog.

Socks became the pet cat of the Clintons in 1991 after he jumped into Chelsea Clinton's arms at her piano teacher's home in Little Rock, Arkansas. Socks was playing with his sibling, Midnight, who was later adopted by another family.

When Bill Clinton became President, Socks moved with the family from the governor's mansion in Arkansas to the White House. Even though he was the official 'first pet', he shared his food and water with a stray tabby cat, named Slippers. Socks was often taken to schools and hospitals to visit. Children visiting the White House website would be shown around by a cartoon version of Socks.

In December 2002, Socks was part of the Little Rock, Arkansas Christmas parade.

Things changed for the worse for Socks in 1997. The Clintons got a pet dog named Buddy, a Labrador Retriever. Socks hated this dog. Hillary Clinton said Socks "despised Buddy from first sight, instantly and forever." Bill Clinton said, "I did better with ... the Palestinians and the Israelis than I've done with Socks and Buddy." When the Clintons left the White House in 2001, they took Buddy to their new home, but left Socks with Betty Currie. Buddy died within a year, being hit by a car in 2002. 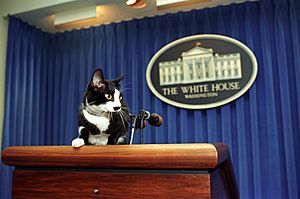 Socks the cat at the podium in the White House Press Briefing Room.

A Republican Representative in the United States Congress, Dan Burton once argued against the use of White House employees, postage, and stationery being used to answer mail that was written to the cat.

All content from Kiddle encyclopedia articles (including the article images and facts) can be freely used under Attribution-ShareAlike license, unless stated otherwise. Cite this article:
Socks (cat) Facts for Kids. Kiddle Encyclopedia.