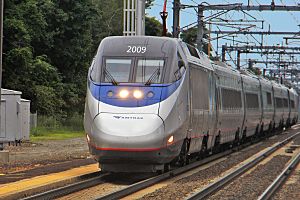 Acela Express is Amtrak's flagship high-speed train service. It runs along the Northeast Corridor, which is in the northeastern United States between Washington D.C. and Boston. It has 16 stops, including Providence, Rhode Island; Baltimore, Maryland; Philadelphia and New York City. The route has some places with high speed rail. Acela trains are the fastest trainsets in the Americas. They can move 150 mph (240 km/m) on 33.9 mi 54.6 on the route. Acela carried more than 3.4 million passengers in 2016. Only Northeast Regional carried more people then, over 8 million. Its 2016 revenue was US$585 million, 25% of Amtrak's total.

All content from Kiddle encyclopedia articles (including the article images and facts) can be freely used under Attribution-ShareAlike license, unless stated otherwise. Cite this article:
Acela Express Facts for Kids. Kiddle Encyclopedia.