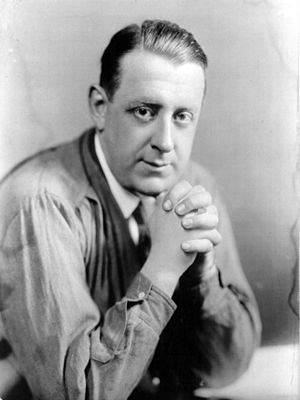 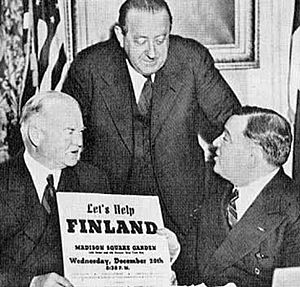 This picture shows Hendrik Willem van Loon in the middle. He is at a big meeting in New York City on December 20, 1939. At this meeting, many Americans talked about how to help Finland fight the Soviet Union. On the left in the picture is Herbert Hoover, whose job was to make the meeting run well, and on the right is Fiorello La Guardia, who was the mayor of New York City at that time.

He was born in Rotterdam in the Netherlands. His father was also named Hendrik Willem van Loon. His mother was named Elisabeth Johanna Hankin. In 1902, he went to the United States to study at Cornell University. He graduated from Cornell in 1905. In 1906 he married Eliza Ingersoll Bowditch. Her father was a teacher at Harvard. They had two sons, Henry Bowditch van Loon and Gerard Willem van Loon. After they got married, Hendrik and Eliza moved to Munich, Germany. Hendrik studied at the University of Munich. In 1911 he got his Ph.D. He had to write a long paper to show that he was a good enough student to get the Ph.D. The paper he wrote was called The Fall of the Dutch Republic. In 1913 he published it as a book. During the Russian Revolution of 1905 and again at the start of World War I he worked for the Associated Press. He went to the places where soldiers were fighting each other and wrote about what the battles were like. From 1915 to 1917 he taught at Cornell University. In 1919 he was made a citizen of the United States. In 1920 he married Eliza Helen (Jimmie) Criswell. In 1927 he married Frances Goodrich Ames, a woman who wrote plays. Later he stopped being married to Frances Ames. He went back to Eliza Criswell. No one knows if they got married again. When he died in 1944, he gave his things to Eliza Criswell.

Hendrik Willem van Loon visited Germany lots of times in the 1920s. In 1933, when the Nazis ruled Germany, they told him he could not visit Germany any more. In 1938, Hendrik wrote a book that he called Our Battle: Being One Man's Answer to "My Battle" by Adolf Hitler. This book said why Hendrik did not like Adolf Hitler's book Mein Kampf. (Mein Kampf means "My Battle" in the German language.) Franklin Delano Roosevelt liked Hendrik's book Our Battle very much. In 1940, Hendrik helped Roosevelt try to get to be President of the United States.

Someone once asked Hendrik Willem van Loon how to say his last name. He answered, "I still stick to the Dutch pronunciation of the double o—Loon like loan in 'Loan and Trust Co.' My sons will probably accept the American pronunciation. It really does not matter very much." 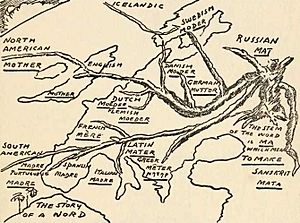 This is one picture from The Story of Mankind. It shows the way that Hendrik thought the word "mother" came to be the way it is. It shows the same word in a lot of different languages, with paths from one to the next. The paths all start on the right-hand side of the picture.

These are the books that Hendrik Willem van Loon wrote. The dates show the first time each book was printed. The other names tell what publisher printed them.

All content from Kiddle encyclopedia articles (including the article images and facts) can be freely used under Attribution-ShareAlike license, unless stated otherwise. Cite this article:
Hendrik Willem van Loon Facts for Kids. Kiddle Encyclopedia.