The New Amsterdam Theatre is a Broadway theatre located at 214 West 42nd Street between Seventh and Eighth Avenues in the Theater District of Manhattan, New York City, off of Times Square. It was built in 1902–1903 and was designed by the architecture firm of Henry Hertz and Hugh Tallant; the Roof Garden, where more risqué productions were presented, and which no longer exists, was added in 1904, designed by the same firm. The remainder of the building was utilized for offices.

From 1913 to 1927, the theatre was the home of the Ziegfeld Follies, whose producer, Florenz Ziegfeld, Jr., maintained an office in the building, and operated a nightclub on the roof. George White's Scandals and Eva LeGallienne's Civic Repertory Theatre were subsequent tenants. It was used as a movie theatre beginning in 1937, closed in 1985, and was leased by The Walt Disney Company and renovated by Hardy Holzman Pfeiffer in 1995–97 to be the flagship for Disney Theatrical Productions presentations on Broadway.

Both the Beaux-Arts exterior and the Art Nouveau interior of the building are New York City landmarks, having been designated in 1979. In addition, the building was added to the National Register of Historic Places in 1980.

Along with the Hudson and Lyceum Theatres, also built in 1903, the New Amsterdam is one of the oldest surviving Broadway venues. 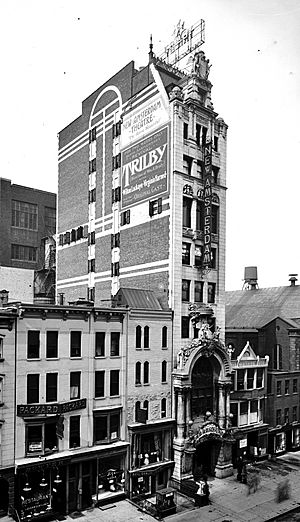 The Beaux-Arts facade of the New Amsterdam is a narrow slice which leads to the theatre's interior, the first concrete example of architectural Art Nouveau in New York. The building was constructed in 1902–03 by the partnership of impresarios A.L. Erlanger and Marcus Klaw, was designed by architects Herts & Tallant. Decoration was carried out by an extensive team of painters and sculptors that included George Gray Barnard, Robert Blum, the brothers Neumark, George Daniel M. Peixotto, Roland Hinton Perry and Albert Beck Wenzell. At the time of construction, it was the largest theatre in New York, with a seating capacity of 1,702.

A racier sister show of the Follies, the Midnight Frolics, played in the New Amsterdam's Roof Garden theatre. The New Amsterdam was the scene of Marilyn Miller's greatest triumphs in the musicals Sally (1920) and Sunny, which opened in September 1925 co-starring Clifton Webb as Harold Wendell-Wendell and ran for three seasons. But the theatre also hosted serious productions, and in June 1927 Basil Rathbone appeared there as Cassius in Julius Caesar.

During its years as a movie theatre, the Roof Garden was used as a rehearsal space for a number of shows, including the original Broadway productions of My Fair Lady, Gypsy and Camelot. In 1936, the theatre staged its last play, Sigmund Romberg's Forbidden Melody, until Disney control.

Disney Theatrical Productions signed a 49-year revenue-based lease for the property in May 1995, with Disney Development restoring the building. The theatre, which had recently been used as a filming location for the movie Vanya on 42nd Street, was dilapidated; it would take several years, and millions of dollars, to restore it to its original use and grandeur. The roof garden remained closed when inspectors discovered that it could not meet modern building codes.

The New Amsterdam was officially reopened on April 2, 1997. In November 1997, after the premiere of the film Hercules and a limited engagement of a concert version of King David, Disney's stage version of The Lion King opened. On June 4, 2006, The Lion King closed in The New Amsterdam Theatre, moving two blocks uptown to the Minskoff Theatre on June 13, 2006. Mary Poppins began previews at the New Amsterdam Theatre on October 16, 2006 and opened on November 16, 2006, where it continued to run until March 3, 2013. The theatre was renovated to accommodate Disney's Aladdin, which was mounted in the theatre in 2014.

In 2008, The Roof Garden and 42nd Street office tower were renovated to become the home offices for Disney Theatrical Productions. 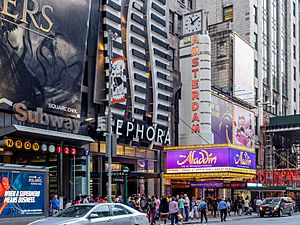 Aladdin at the New Amsterdam Theater

The New Amsterdam has also hosted events benefitting Broadway Cares/Equity Fights AIDS, including the annual Easter Bonnet Competition, until the event moved to the Minskoff Theatre. The New Amsterdam is now home to BC/EFA's annual Red Bucket Follies (formerly known as Gypsy of the Year Competition), the fall/winter sister event to the Easter Bonnet. In recent years, the benefit's honored guest had been centenarian Doris Eaton Travis, who originally performed on the New Amsterdam stage in the Ziegfeld Follies of 1919.

In 1999, the Backstreet Boys televised a concert for Disney Channel called Backstreet Boys In Concert from the New Amsterdam Theatre. It was a prelude to their 1999-2000 Into the Millennium Tour.

All content from Kiddle encyclopedia articles (including the article images and facts) can be freely used under Attribution-ShareAlike license, unless stated otherwise. Cite this article:
New Amsterdam Theatre Facts for Kids. Kiddle Encyclopedia.