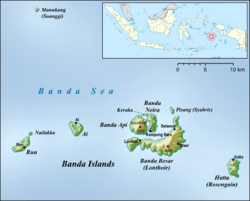 Run in the west of the Banda Islands

Pulau Run is an island in Indonesia. It is one of the smallest Islands of the Banda Islands. It is about 3 km long and less than 1 km wide.

It used to be of great importance, because of the value of the spices nutmeg and mace. Both spices are from the same tree. The trees were only grown on the Banda Islands. During the history of the spice trade sailors of the British East India Company of the second expedition of James Lancaster, John Davis and John Middleton who stayed in Bantam on Java first reached the Island in 1603. They made good contacts with the people who lived there.

Two wars were fought over the extremely costly spices.

The Treaty of Westminster ended the First Anglo-Dutch War of 1652–1654. According to the treaty, Run should have been returned to England. The first attempt in 1660 failed due to formal constraints by the Dutch; after the second in 1665 the English traders were expelled in the same year and the Dutch destroyed the nutmeg trees.

After the second Anglo-Dutch War of 1665–1667 England and the United Provinces of the Netherlands agreed in the Treaty of Breda to the status quo: The English kept the island of Manhattan which a fleet sent by the Duke of York (the future Charles II), had occupied illegally in 1664 and renamed from New Amsterdam to New York. Run was officially given to the Dutch.

The Dutch monopoly on nutmeg and mace was destroyed by the transfer of nutmeg trees to Ceylon, Singapore and other British colonies in 1817 after the capture of the main Island Bandalontor in 1810 by Captain Cole. This led to the decline of the Dutch supremacy in the spice trade, but there are still nutmeg trees growing on Run today.

All content from Kiddle encyclopedia articles (including the article images and facts) can be freely used under Attribution-ShareAlike license, unless stated otherwise. Cite this article:
Run (island) Facts for Kids. Kiddle Encyclopedia.