Johan Henri Eliza Ferrier (12 May 1910 – 4 January 2010) was a Surinamese politician who served as the 1st President of Suriname from 25 November 1975 to 13 August 1980. He was that country's last governor before independence, from 1968 to 1975, and first president after it gained independence from the Netherlands.

He was named the twentieth century's most important politician in Suriname in 1999. 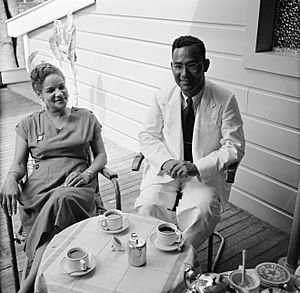 Ferrier was born in 1910 in Suriname's largest city and its capital, Paramaribo. He trained as a teacher. In 1946 he assisted in the establishment of the country's National Party, while Suriname was a colony of the Netherlands.

He was co-founded of the Boy Scouts van Suriname and its first Chief Scout. At age 16 he was a teacher in the district Saramacca and founded his first Scout Group. This group still exists and now bears the name "De Johan Ferrier groep, de groep 2 Oranje Dassers". 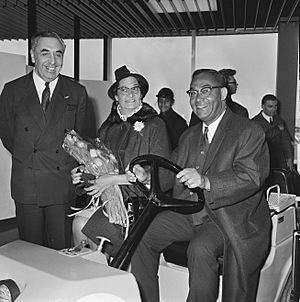 Ferrier was a member of the National Council until 1948. He then went to Amsterdam in the Netherlands to learn education theory. When he went back to Suriname, which had by then become an autonomous country within the Kingdom of the Netherlands, he continued to study and to have a career in education.

He served as both prime minister and interior minister for a three-year period from 1955 until 1958. He also spent time as Suriname's head of education. From 1968 until 1975 he retained the post of governor. At this stage Suriname was made independent. Ferrier was selected as President of the country. Dési Bouterse's 1980 coup d'état prompted Ferrier to resign within six months.

Ferrier then accompanied his relations to live in the Netherlands. He lived with them in Oegstgeest. His daughter, Kathleen Ferrier, is a former member of the House of Representatives of the Netherlands for the Christian Democratic Appeal. In 2005, Ferrier's memoirs Last Governor, First President: The Century of Johan Ferrier, Surinamese were published. The Dutch Queen gave him a knighthood. An obituary in national morning daily De Volkskrant said he had claimed: "Even in the darkest days, I kept my optimism". 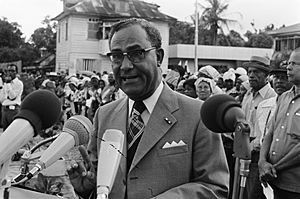 The Governor of Suriname Johan Ferrier 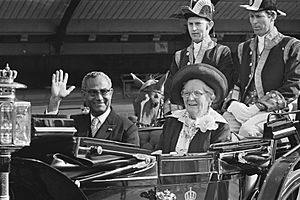 Ferrier died from heart failure in the early morning on 4 January 2010 while sleeping in his Dutch home in Oegstgeest at the age of 99, four months short of his 100th birthday.

Ferrier was buried on 11 January 2010, in the Dutch town of Oegstgeest, where he had been living since 1980. From 16 April 2009, when former Sudan President Abdel Halim Muhammad died until his own death, Ferrier was the world's oldest living former head of state.

On 12 May 2010, the day Johan Ferrier would have celebrated his 100th birthday, the Johan Ferrier Fund was officially launched. The Fund strives to follow in his footsteps in supporting Surinamese projects with educational and cultural goals. The Johan Ferrier Fund is an initiative of his daughter Joan Ferrier who first presented the fund in the presence of her father in September 2009.

All content from Kiddle encyclopedia articles (including the article images and facts) can be freely used under Attribution-ShareAlike license, unless stated otherwise. Cite this article:
Johan Ferrier Facts for Kids. Kiddle Encyclopedia.