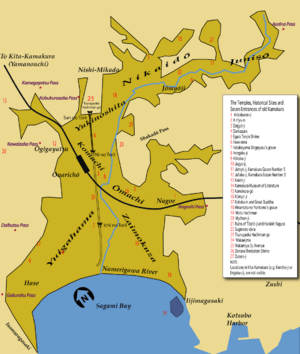 Map of Kamakura on Sagami Bay

Kamakura (鎌倉市, Kamakura-shi) is a city in Kanagawa, Japan. It is about 50 kilometres (31 mi) south of Tokyo. It was the functioning capital of Japan during the Kamakura period (1203-1333).

In 1250, Kamakura was the 4th largest city in the world with 200,000 people. The other two large cities in Japan at this time were Kyoto and Nara.

Kamakura was made a municipality on November 3, 1939.

Today, Kamakura is famous as an upper-class area for people to live. This is because of the history and because it is close to the mountains and the sea.

Kamakura has many Buddhist temples. The huge outdoor bronze statue of Buddha at Kamakura is world famous. 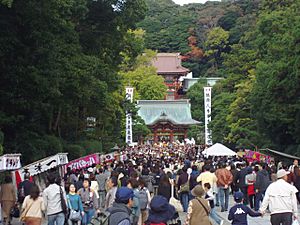 Crowds at the Tsurugaoka Hachiman-gū shrine at Kamakura.

The city has many Shinto shrines, including 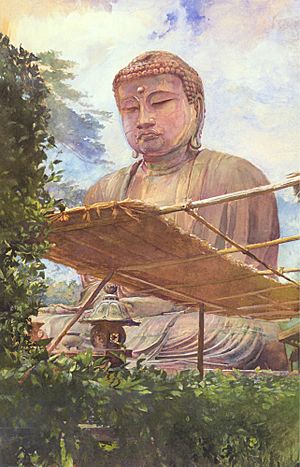 All content from Kiddle encyclopedia articles (including the article images and facts) can be freely used under Attribution-ShareAlike license, unless stated otherwise. Cite this article:
Kamakura, Kanagawa Facts for Kids. Kiddle Encyclopedia.