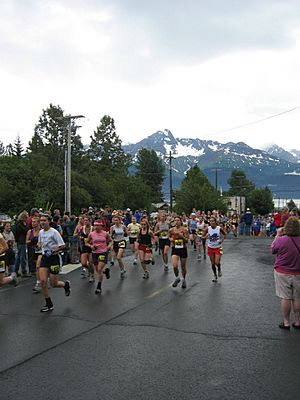 Runners shortly after the start of the race

The Mount Marathon Race is a mountain race that is run every Fourth of July in Seward, Alaska.

The race begins downtown, at Fourth and Adams, in front of the First National Bank Alaska, and ends a block south of where it began, at Fourth and Washington. The juniors' race starts at 9am, while the start times for the men's and women's races alternate each year.

The halfway point is a stone marker on Mount Marathon, 2,974 feet (906 m) above sea level, and a mile and a half from the finish line. The total race course distance is about 3.1 miles (5 kilometers). Leading racers will typically reach the highest point from the starting line in 33–40 minutes, and reach the finish line from the turn in 10–15 minutes. Average speed uphill is 2 mph. Average speed downhill is 12 mph. It is not uncommon for the racers who finish to cross the finish line injured or bleeding and covered in mud.

In order to limit the environmental impact of the race, the entrants were limited to 350 men, 350 women, and 200 juniors until 2012, when the field was expanded to permit 400 entrants for the men's and women's races. In 2013, however, the number of entries was again lowered to 350 each for the men's and women's races. In 2017, the number of entries in the juniors race was increased to 300, with 150 slots available for boys and 150 for girls.

The slots are filled in the following order:

The remaining slots are filled by a weighted lottery. Instituted after the 2013 race, this systems gives racers who have applied before additional entries in the lottery and improving their chances of being selected. In 2019, the race offered a waitlist for the first time.

Previous winners of any prior year are allowed to enter until the morning of the race.

The Mount Marathon Race is one of a number of races believed to be among the oldest foot races in America. Various claims say it was first run in 1908, 1909, or 1912—but there is no evidence to support any date before the first organized run in 1915. The challenge was to run from downtown, to the top of the mountain and back, in under an hour. Legend says that it all started out as a bar bet between two "sourdoughs" (slang for gold miners), with one betting a man could race to the top of the mountain and back in less than an hour, and the other saying that wasn't possible. The winning racer finished in one hour and twenty minutes. Since Seward is a port town, every arriving ship had its challenger who wanted to beat the one hour bet. This may have been how the race evolved.

For the first official race, in 1915, local merchants donated prizes and suggested the race take place on the 4th of July. There was no official route—racers were free to choose their own trails to the summit and back. The winning runner, James Walters, finished in one hour, two minutes.

The event was honored in February 2011 with an official induction into the Alaska Sports Hall of Fame.

During the 2012 race, an Anchorage man, Michael LeMaitre, disappeared after last being seen by race officials approaching the summit. He was officially declared dead in August 2012, and his family reached a settlement with the Seward Chamber of Commerce in 2014. It was the first presumed fatality in the history of the race, which normally produces numerous injuries. In response to LeMaitre's disappearance and unusually severe injuries suffered by two other racers in 2012, several safety improvements were made prior to the 2013 race.

In 2019. the juniors race was cancelled due to air quality concerns related to the Swan Lake Fire, which started in the Kenai National Wildlife Refuge on June 5; all racers were given the option to defer entry to 2020. 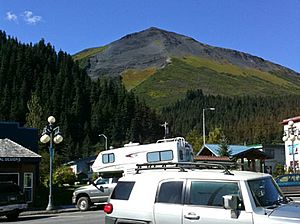 View of the mountain from Seward

All content from Kiddle encyclopedia articles (including the article images and facts) can be freely used under Attribution-ShareAlike license, unless stated otherwise. Cite this article:
Mount Marathon Race Facts for Kids. Kiddle Encyclopedia.