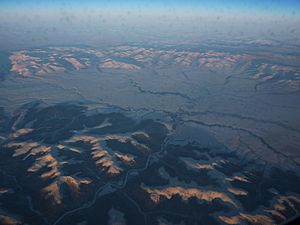 Bendeleben Mountains (in the background) seen from the south

The Bendeleben (/ˈbɛn.dəˌleɪ.bɨn/) Mountains are a mountain range on the heart of the Seward Peninsula in Nome Census Area, Alaska, United States. This range forms a major divide between drainage basins draining into the Pacific Ocean and the Arctic Ocean. The tallest peak, Mount Bendeleben is 3,730 feet (1,140 m) at the summit, and is located on the west end. Bits of the range go into the Bering Land Bridge National Preserve, but most of the peaks remain unclaimed. The Tubutulik River flows in the area.

Mount Bendeleben is the highest point on the Seward Peninsula east of the Kigluaik Mountains. According to the geologists who studied contiguous areas in 1900, the metamorphic schists of the Bendeleben Mountains were considered distinct from the other schists of the region and were therefore given a name and assigned to a more or less definite stratigraphic position. In 1908, the senior writer of this report made a cross section of the range along the western margin of the area, and in 1909 the party had the opportunity of studying the section north and west. of Death Valley, where rocks previously considered as belonging to the Kigluaik group are exposed. About the head of the Fish River, the mountains are chiefly granitic, but along their flanks and sometimes extending through them in belts of varying breadth which mark the passes are areas of schistose sediments. Similar to the Kigluaik Mountains, the Bendeleban Mountains are rugged, with sharply cut valleys, and many glacial cirques.

All content from Kiddle encyclopedia articles (including the article images and facts) can be freely used under Attribution-ShareAlike license, unless stated otherwise. Cite this article:
Bendeleben Mountains Facts for Kids. Kiddle Encyclopedia.