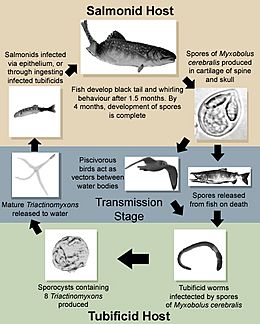 Myxobolus cerebralis is a small Myxozoan parasite that eats the insides of fish like salmon and trout, causing whirling disease.

This is a problem in fish farming and also in natural fish groups. In the last 100 years, it has spread to most of Europe (including Russia), the United States, South Africa, and other countries. In the 1980s, people found out that M. cerebralis needs to live in a worm before it can live in a fish. It infects both the fish and the worm by poking a hole in them and putting part of itself in.

Whirling disease hurts young fish the most, and can hurt bones and nerves. Fish with the disease do not swim very well, and they "whirl" or spin instead of swimming straight. This makes it hard for the fish to get food and get away from danger. Dealing with M. cerebralis costs more money than most other parasites in its group (which are called "myxozoans"). People do not get sick with whirling disease, though; only fish do.

All content from Kiddle encyclopedia articles (including the article images and facts) can be freely used under Attribution-ShareAlike license, unless stated otherwise. Cite this article:
Myxobolus cerebralis Facts for Kids. Kiddle Encyclopedia.