Thermus aquaticus is a species of bacteria that can tolerate high temperatures, one of several thermophilic bacteria that belong to the Deinococcus–Thermus group. It is the source of the heat-resistant enzyme Taq DNA polymerase, one of the most important enzymes in molecular biology because of its use in the polymerase chain reaction (PCR) DNA amplification technique. 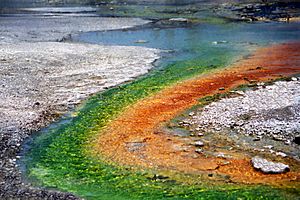 Hot springs with algae and bacteria in Yellowstone National Park

When studies of biological organisms in hot springs began in the 1960s, scientists thought that the life of thermophilic bacteria could not be sustained in temperatures above about 55 °C (131 °F). Soon, however, it was discovered that many bacteria in different springs not only survived, but also thrived in higher temperatures. In 1969, Thomas D. Brock and Hudson Freeze of Indiana University reported a new species of thermophilic bacteria which they named Thermus aquaticus. The bacterium was first isolated from Mushroom Spring in the Lower Geyser Basin of Yellowstone National Park, which is near the major Great Fountain Geyser and White Dome Geyser, and has since been found in similar thermal habitats around the world.

T. aquaticus shows best growth at 65–70 °C (149–158 °F), but can survive at temperatures of 50–80 °C (122–176 °F). It primarily scavenges for protein from its environment as is evidenced by the large number of extracellular and intracellular proteases and peptidases as well as transport proteins for amino acids and oligopeptides across its cell membrane. This bacterium is a chemotroph—it performs chemosynthesis to obtain food. However, since its range of temperature overlaps somewhat with that of the photosynthetic cyanobacteria that share its ideal environment, it is sometimes found living jointly with its neighbors, obtaining energy for growth from their photosynthesis. T. aquaticus normally respires aerobically but one of its strains, Thermus aquaticus Y51MC23, is able to be grown anaerobically.

The genetic material of T. aquaticus consists of one chromosome and four plasmids, and its complete genome sequencing revealed CRISPR genes at numerous loci.

Thermus aquaticus is generally of cylindrical shape with a diameter of 0.5 μm to 0.8 μm. The shorter rod shape has a length of 5 μm to 10 μm. The longer filament shape has a length that varies greatly and in some cases exceeds 200 μm. T. aquaticus has shown multiple possible morphologies in different cultures. The rod-shaped bacteria have a tendency to aggregate. Associations of several individuals can lead to the formation of spherical bodies 10 μm to 20 μm in diameter, also called rotund bodies. These bodies are not composed of cell envelope or outer membrane components as previously thought, but are instead made from remodelled peptidoglycan cell wall. Their exact function in the survival of T. aquaticus remains unknown but has been theorised to include temporary food and nucleotide storage, or they may play a role in the attachment and organisation of colonies.

T. aquaticus has become famous as a source of thermostable enzymes, particularly the Taq DNA polymerase, as described below.

Studies of this extreme thermophilic bacterium that could be grown in cell culture was initially centered on attempts to understand how enzymes, which are normally inactive at high temperature, can function at high temperature in thermophiles. In 1970, Freeze and Brock published an article describing a thermostable aldolase enzyme from T. aquaticus.

The first polymerase enzyme isolated from T. aquaticus in 1974 was a DNA-dependent RNA polymerase, used in the process of transcription.

Most molecular biologists probably became aware of T. aquaticus in the late 1970s or early 1980s because of the isolation of useful restriction endonucleases from this organism. Use of the term Taq to refer to Thermus aquaticus arose at this time from the convention of giving restriction enzymes short names, such as Sal and Hin, derived from the genus and species of the source organisms.

DNA polymerase was first isolated from T. aquaticus in 1976. The first advantage found for this thermostable (temperature optimum 72°C, does not denature even in 95 °C) DNA polymerase was that it could be isolated in a purer form (free of other enzyme contaminants) than could the DNA polymerase from other sources. Later, Kary Mullis and other investigators at Cetus Corporation discovered this enzyme could be used in the polymerase chain reaction (PCR) process for amplifying short segments of DNA, eliminating the need to add E. coli polymerase enzymes after every cycle of thermal denaturation of the DNA. The enzyme was also cloned, sequenced, modified (to produce the shorter 'Stoffel fragment'), and produced in large quantities for commercial sale. In 1989 Science magazine named Taq polymerase as its first "Molecule of the Year". In 1993, Mullis was awarded the Nobel Prize in Chemistry for his work with PCR.

All content from Kiddle encyclopedia articles (including the article images and facts) can be freely used under Attribution-ShareAlike license, unless stated otherwise. Cite this article:
Thermus aquaticus Facts for Kids. Kiddle Encyclopedia.