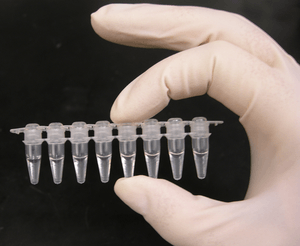 A strip of eight PCR tubes, each containing a 100 μl reaction mixture 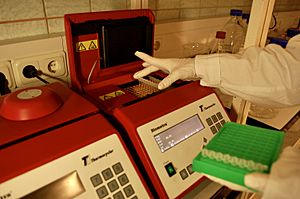 Placing a strip of eight PCR tubes into a thermal cycler

Polymerase chain reaction (PCR) is a way to make many copies of a sequence of DNA. This is done in a lab, using an enzyme called DNA polymerase. It is called chain reaction because the result of one cycle is used immediately for the next cycle. This allows exponential growth to happen.

PCR has many uses in a biological or biochemical setting. Because DNA is unique for every living thing, experimenters can often extract only small amounts of the DNA they are interested in from a specimen. These amounts are usually too little to be useful, and so a scientist will use PCR to make enough copies to start experimenting with. For this reason, it is one of the most common techniques used in genetics labs around the world, making it useful in experiments on many things, including gene therapy, infectious diseases, and even forensics.

This process was developed in 1983 by Kary Mullis. He was not the first person to develop the PCR process, but he was the first to make the process usable. He was awarded the Nobel Prize in Chemistry along with Michael Smith for their work in the PCR process.

The method consists of repeated heating and cooling, causing "melting" (separation of the two strands) and replication of the original DNA, also called a template. Short DNA fragments consisting of DNA sequences complementary to the ends of the template, called primers, and a DNA polymerase are key materials for selective and repetitive steps.

The technique proceeds in three steps:

After the first cycle, there are 4 DNA strands. The process repeats with the 4 DNA strands, which will go on to make 8 strands, then repeat itself again to make 16 strands. In this way, PCR doubles the amount of DNA in a sample after each cycle, making it possible to obtain millions of copies of a DNA strand overnight.

All content from Kiddle encyclopedia articles (including the article images and facts) can be freely used under Attribution-ShareAlike license, unless stated otherwise. Cite this article:
Polymerase chain reaction Facts for Kids. Kiddle Encyclopedia.