The visitor center, museum, and headquarters of the Death Valley National Park are located at Furnace Creek.

Springs in the Amargosa Range created a natural oasis at Furnace Creek, which has subsequently dwindled due to diversion of this water to support the village.

Furnace Creek has the distinction of holding the record for the highest recorded temperature in the world, reaching 134 °F (56.7 °C) on July 10, 1913. Some meteorologists dispute the accuracy of the 1913 temperature measurement.

In addition, a ground temperature of 201 °F (93.9 °C) was recorded in Furnace Creek on July 15, 1972; this may be the highest natural ground surface temperature ever recorded. (Temperatures measured directly on the ground may exceed air temperatures by 30 to 50 °C.) 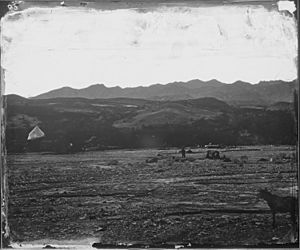 The Timbisha Native Americans inhabited what is now known as the Furnace Creek oasis for centuries.

The Timbisha tribe currently live at their Death Valley Indian Community reservation here. The Timbisha people provided many of the artisans and builders to construct the original Fred Harvey Company resort buildings, the Indian Village, and Park Service structures. They were one of the first tribes to secure tribal status through the Bureau of Indian Affairs' Federal Acknowledgment Process.

In present times, as the federally recognized Death Valley Timbisha Shoshone Band of California, they are the majority residents of Furnace Creek's permanent population at the tribe's reservation, the 'Death Valley Indian Community.'

Furnace Creek was formerly the center of Death Valley mining and operations for the Pacific Coast Borax Company and the historic 20 Mule Teams hauling wagon trains of borax across the Mojave Desert.

All content from Kiddle encyclopedia articles (including the article images and facts) can be freely used under Attribution-ShareAlike license, unless stated otherwise. Cite this article:
Furnace Creek, California Facts for Kids. Kiddle Encyclopedia.