As of the 2010 census, the CDP had a population of 208. The capital of the Havasupai Indian Reservation, Supai is the only place in the United States where mail is still carried out by mules.

Supai has been referred to as "the most remote community" in the contiguous United States by the U.S. Department of Agriculture. It is accessible only by helicopter, on foot or by mule. Supai is 8 miles (13 km) from the nearest road and has no automobiles in the community.

Tourists and some residents were evacuated from Supai and surrounding area on August 17 and 18, 2008, due to flooding of Havasu Creek complicated by the failure of the earthen Redlands Dam after a night of heavy rainfall. Evacuees were taken to Peach Springs, Arizona. More heavy rains were expected and a flash flood warning was put into effect, necessitating the evacuation, according to the National Park Service. The floods were significant enough to attract coverage from international media.

Damage to the trails, bridges, and campground was severe enough for Havasupai to close visitor access to the village, campground, and falls until the spring of 2009. Further flooding in 2010 resulted in damage to repairs made previously and closures effective until May 2011. 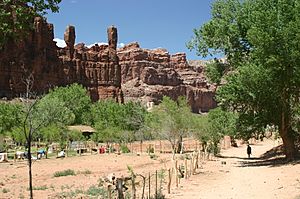 Located within the Grand Canyon, Supai is only accessible by foot, pack animal or helicopter. Mail and package delivery to the community is thus delayed; delivery time for mail from Bullhead City, Arizona, via the United States Postal Service is at least a week because it is carried out by mule. 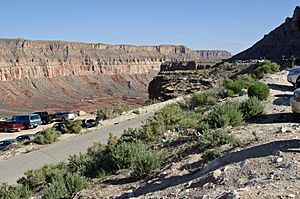 Parking at Hualapai Hilltop, the trailhead for the 8-mile trail into Supai. 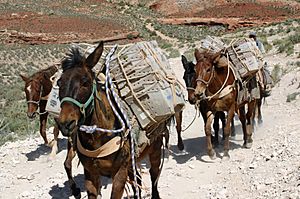 Supai has one small, air-conditioned lodge (Havasupai Lodge), a convenience store and a cafe.

All mail leaving Supai has a special postmark showing that it was sent out by mule train. 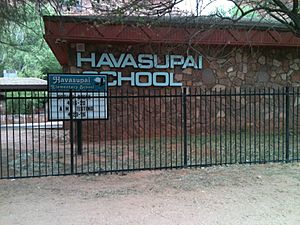 There is one K–6 school in Supai, Havasupai Elementary School, run by the Bureau of Indian Education. As of 2017[update] it only offers mathematics and English classes.

As of 2017, around 20% of the school's students graduate from high school.

According to Coconino County's parcel viewer, Supai is in the "Unorganized School District #00". According to Arizona law, an unorganized school district is one that does not have a high school.

All content from Kiddle encyclopedia articles (including the article images and facts) can be freely used under Attribution-ShareAlike license, unless stated otherwise. Cite this article:
Supai, Arizona Facts for Kids. Kiddle Encyclopedia.