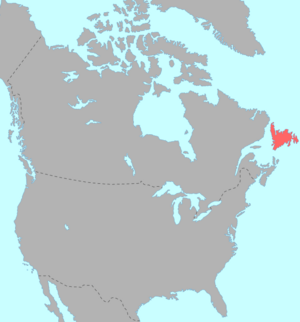 Newfoundland, historic home of the Beothuk

The Beothuk ( or also spelled Beothuck) were a group of indigenous people living on the island of Newfoundland.

Beginning around 1500 CE, the Beothuk culture formed. This appeared to be the most recent cultural manifestation of peoples who first migrated from Labrador to present-day Newfoundland around AD 1. The ancestors of this group had three earlier cultural phases, each lasting approximately 500 years.

The Beothuk lived throughout the island of Newfoundland, particularly in the Notre Dame and Bonavista Bay areas. Estimates vary as to the number of Beothuk at the time of contact with Europeans. Beothuk researcher Ingeborg Marshall has argued that a valid understanding of Beothuk history and culture is directly impacted by how and by whom historical records were created, pointing to the ethnocentric nature of European accounts which positioned native populations as inherently inferior. Scholars of the 19th and early 20th century estimated about 2,000 individuals at the time of European contact in the 15th century. There is purportedly good evidence that there may have been no more than 500 to 700 people. They lived in independent, self-sufficient, extended family groups of 30 to 55 people.

Like many other hunter-gathering peoples, they appear to have had band leaders but probably not more formal "chiefs". They lived in conical dwellings known as mamateeks, which were fortified for the winter season. These were constructed by arranging poles in a circle, tying them at the top, and covering them with birch bark. The floors were dug with hollows used for sleeping. A fireplace was made at the center.

During spring, the Beothuk used red ochre to paint not only their bodies but also their houses, canoes, weapons, household appliances, and musical instruments. This practice-led Europeans to refer to them as "Red Indians". The use of ochre had great cultural significance. The decorating was done during an annual multi-day spring celebration. It designated tribal identity; for example, decorating newborn children was a way to welcome them into the tribe. Forbidding a person to wear ochre was a form of punishment.

Their main sources of food were caribou, salmon, and seals, augmented by harvesting other animal and plant species. The Beothuk followed the seasonal migratory habits of their principal quarry. In the fall, they set up deer fences, sometimes 30–40 miles (48–64 km) long, used to drive migrating caribou toward waiting hunters armed with bows and arrows.

The Beothuk are also known to have made a pudding out of tree sap and the dried yolk of the eggs of the great auk. They preserved surplus food for use during winter, trapped various fur-bearing animals, and worked their skins for warm clothing. The fur side was worn next to the skin, to trap air against a person's body.

Beothuk canoes were made of caribou or seal skin, and the bow of the canoe was stiffened with spruce bark. Canoes resembled kayaks and were said to be fifteen feet (4.57 m) in length and two and a half feet (0.76 m) in width with enough room to carry children, dogs and property.

The Beothuk followed elaborate burial practices. After wrapping the bodies in birch bark, they buried the dead in isolated locations. In one form, a shallow grave was covered with a rock pile. At other times they laid the body on a scaffold, or placed it in a burial box, with the knees folded. The survivors placed offerings at burial sites to accompany the dead, such as figurines, pendants, and replicas of tools.

All content from Kiddle encyclopedia articles (including the article images and facts) can be freely used under Attribution-ShareAlike license, unless stated otherwise. Cite this article:
Beothuk Facts for Kids. Kiddle Encyclopedia.