The casino was opened on March 24, 1996 in the former city of Hull, Quebec, the third of a group of casinos built by the provincial government to raise funds. Ottawa, the larger city across the river, was also planning to build a casino in the early 1990s, but these plans were blocked by the provincial government. The Gatineau casino thus also serves Ottawa and Eastern Ontario. It is operated by Société des casinos du Québec a subsidiary of Loto-Québec. In 2016 the casino provided the government with some $244,679,000 in profit, employed more than 1,400 people and attracted more than two and a half million visitors. 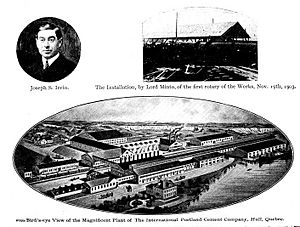 The casino is built on a rocky precipice over what was once International Portland Cement Company quarry but is today Lac de la Carrière. This lake is home to a large fountain, whose jet is visible through much of the old Hull sector during the summer. To the east of the casino is Lac Leamy, from which it gets its name. Attached to the casino is a 349-room Hilton hotel. The casino also has an 1100-seat theatre that has become one of the region's main music venues. The casino is also home to several bars and restaurants. In the casino itself there are more than 1,800 slot machines and more than 65 tables including roulette, blackjack, baccarat, craps and Texas hold 'em poker. It is open 24/7.

All content from Kiddle encyclopedia articles (including the article images and facts) can be freely used under Attribution-ShareAlike license, unless stated otherwise. Cite this article:
Casino du Lac-Leamy Facts for Kids. Kiddle Encyclopedia.