The Canada Science and Technology Museum (French: Musée des sciences et de la technologie du Canada) is located in Ottawa, Ontario, Canada, on St. Laurent Boulevard, to the south of the Queensway (Highway 417). The role of the museum is to help the public to understand the technological and scientific history of Canada and the ongoing relationships between science, technology and Canadian society. The Canada Science and Technology Museum is operated by Ingenium which also runs the Canada Agriculture and Food Museum and the Canada Aviation and Space Museum.

The National Museum of Science and Technology was established in 1967 as a Centennial project by the Canadian Government. In October 1966 the government appointed David McCurdy Baird as the first director of the museum; because it was intended that the museum would open during the centennial year, Baird's first task was to find an existing building that could be repurposed without delay to house the museum. He found and arranged the purchase of a large former bakery on St. Laurent Boulevard with truck bays and high ceilings. The government already had an aeronautical collection and a collection of railroad artifacts, and within a few months these were installed in the building. A collection of farm equipment from Massey Ferguson arrived soon after.

In 2001, the museum began looking for a new location to move to, citing a lack of space and accessibility. The desire for more scenic surroundings was also a factor, as the museum is currently surrounded mostly by warehouses and strip malls. Four locations were considered: the western section of LeBreton Flats, on the Rockcliffe Parkway next to the Canada Aviation and Space Museum (both in Ottawa), in Jacques Cartier Park on Rue Laurier, and a site on Rue Montcalm (both in the neighbouring city of Gatineau). In 2006, Conservative cabinet minister and MP for Pontiac (which includes the eastern tip of Gatineau) Lawrence Cannon put his support behind the Jacques Cartier Park option.

The Canada Science and Technology Museum closed in September 2014 to undergo an $80-million federally funded retrofit. Part of that funding went towards a new mechanical room that is energy efficient and allows museum staff to precisely control the temperature throughout the building.

During routine maintenance on a leaky roof in September 2014, workers discovered that the roof was in danger of collapse and that mould was spreading from the building's south wall. The museum closed to visitors, and the staff offered to lend out some exhibits to other museums while renovation and repairs were made to the building.

Most of the original building was demolished, leaving only the "crazy kitchen" and the hall of trains. $80 million was spent to create a modern replacement on the same site. The museum reopened on November 17, 2017.

The main museum building on St Laurent Boulevard houses a number of permanent displays, as well as temporary exhibits of the museum's collection and visiting exhibitions.

It contains many sections, as it is one of Canada's biggest museums.

One of its most notable being the large collection of trains housed.

Moving the trains was a feat in its own.

The trains will tell a broader story of Canada between 1900 and 1960 — that of “migrants, business people, farmers, manufacturers, retailers and every average Canadian who travelled or received and sent mail.”

Another famous exhibition is the crazy kitchen. A room that is built on a tilted surface, thus causing gravity to pull visitors towards the wall, but has all its furniture nailed to the floor, so they won't fall, thus creating the illusion that the room is on an ordinary, flat surface. This competing information confuses visitors' brains which makes them feel nauseous.

Artifact Alley, which runs diagonally across the building, displays about 700 historical objects at any one time. 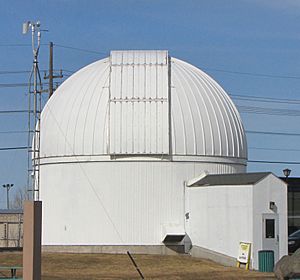 The museum is operated by Ingenium, a Crown corporation that reports to the Department of Canadian Heritage, which is responsible for preserving and protecting Canada's scientific and technical heritage. The Corporation has a staff of about 275 and is responsible for three museums: the Canada Science and Technology Museum, the Canada Agriculture and Food Museum and the Canada Aviation and Space Museum.

All content from Kiddle encyclopedia articles (including the article images and facts) can be freely used under Attribution-ShareAlike license, unless stated otherwise. Cite this article:
Canada Science and Technology Museum Facts for Kids. Kiddle Encyclopedia.