The Canada Agriculture and Food Museum (French: Musée de l'agriculture et de l'alimentation du Canada) is a national agricultural museum in Ottawa, Ontario, Canada. Occupying several buildings within the Central Experimental Farm, the museum operates as a "working farm," and provides public programs and exhibitions on agriculture sciences, and on the history of agriculture in Canada. In addition to the exhibitions held on the grounds, the museum also organizes travelling exhibitions for other museums across the country.

The museum's collection originated from a museum established at the Central Experimental Farm in 1920, although a national agriculture museum was not opened by the federal government until October 1983, as the Agriculture Museum. Initially occupying only a dairy barn, the museum later expanded to include several other buildings on the Central Experimental Farm. The museum was renamed the Canada Agriculture Museum in May 2000, before it adopted its current name in May 2013.

In 1978, exploratory discussions took place regarding the feasibility of creating an agricultural museum within one of the heritage buildings of the Central Experimental Farm. In 1980, the upper floor of the dairy barn was selected to host an exhibition gallery for the collection. A memorandum was signed between Agriculture and Agri-Food Canada and NMC, where the former agreed to provide the facility, and renovate its upper levels to the requirements expected by the NMC; while the NMC agreed to operate the museum. The agricultural collection maintained by the NMC formed the nucleus for the agriculture museum's collection. Public Works Canada completed their renovations of the site in August 1983, with the NMC installing the museum's first two exhibitions, "Haying in Canada," and "A Barn of the Twenties;" the former an exhibition of farm equipment from 1840 to 1960, and the latter an immersive exhibit of a barn in the 1920s. The museum was formally opened on 12 October 1983 as the Agriculture Museum. Since opening the museum's operations has expanded beyond the dairy barn; with the museum operating seven buildings for public and administrative purposes. 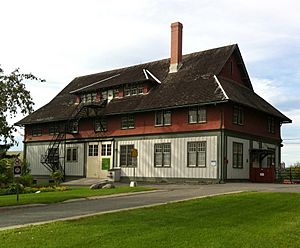 The main building for the museum, the "Dairy Barn", or "Building 88," is a three-storey barn with a gable roof and two side wings. The building is made out of stone, wood shingles, and batten. Originally built in 1887–88, the building was later rebuilt in 1913, after a fire destroyed the original structure. Because of the buildings historical association with dairy farm research, the footprint of the building was designated as a Federal Heritage Building in 1987. The building houses the museum's exhibition spaces, as well as its dairy herd. 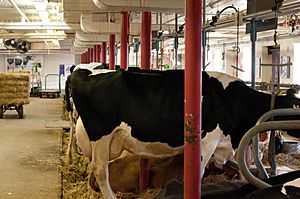 Dairy cattle inside the museum's main building. The museum is considered a "working farm" with a number of livestock on the property.

The museum is operated by Ingenium, a crown corporation responsible for preserving and protecting Canada's scientific and technical heritage. In addition to the Canada Agriculture and Food Museum, Ingenium also manages two other national museums of Canada, the Canada Aviation and Space Museum, and the Canada Science and Technology Museum.

Canada Agriculture and Food Museum provides programs and exhibitions on the history of agriculture in Canada, as well as the benefits and relationship with agricultural sciences. Situated within the Central Experimental Farm, the Canada Agriculture and Food Museum operates as a "working farm," with 150 farm animals available at the demonstration farm, including a herd of 50-head dairy herd, as well as horses, beef cattle, pigs, goats, poultry and sheep. In addition to exhibitions on the history of agriculture, the museum also holds a historical collection of tractors. The museum is affiliated with the Canadian Museums Association, the Canadian Heritage Information Network, and the Virtual Museum of Canada.

The museum also creates traveling exhibits which are brought to smaller museums throughout Canada. It has an outdoor "energy park" which showcases renewable energy sources. In addition to museum exhibits and other public programs, the museum also provides facility rentals for special events, and live demonstrations.

All content from Kiddle encyclopedia articles (including the article images and facts) can be freely used under Attribution-ShareAlike license, unless stated otherwise. Cite this article:
Canada Agriculture and Food Museum Facts for Kids. Kiddle Encyclopedia.