The Central Experimental Farm (CEF), commonly known as the Experimental Farm, is an agricultural facility, working farm, and research centre of the Research Branch of Agriculture and Agri-Food Canada. As the name indicates, this farm is centrally located in and now surrounded by the City of Ottawa, Ontario, Canada. The 4 square kilometres (1.5 sq mi) farm is a National Historic Site of Canada and most buildings are protected and preserved as heritage buildings.

The CEF original intent was to perform scientific research for improvement in agricultural methods and crops. While such research is still being conducted, the park-like atmosphere of the CEF has become an important place of recreation and education for the residents of Ottawa. Furthermore, over the years several other departments and agencies have encroached onto the CEF property, such as Natural Resources Canada, National Defence (HMCS Carleton on Dow's Lake), and the Ottawa Civic Hospital (helicopter pad).

The CEF is bordered by the Rideau Canal (a National Historic Site as well) to the east, Prince of Wales Drive to the South-East, Baseline Road to the south, and Merivale and Fisher Roads to the west, and Carling Avenue to the north. 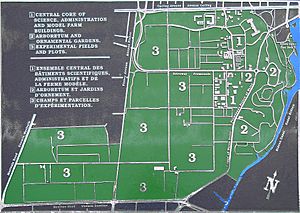 Overview map of the CEF

The Victorian era was a time of great interest in the advancement of natural sciences and many nations built zoos, observatories, botanical gardens, and experimental farms. Canada followed suit and as the result of lobbying by John Carling, the Minister of Agriculture, and William Saunders, the first director of the research branch, the "Act Respecting Experimental Stations" came into force in 1886. The CEF started out with 188 hectares, chosen because of their proximity to Parliament Hill but (at that time) outside the city. Over the next few years the site was prepared by improving the land, building the facilities, and planting the Arboretum and forest belt. Early research projects focused only on entomology, botany, and horticulture. 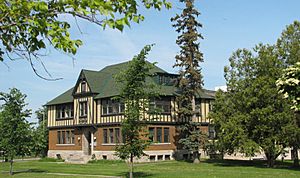 Historic Building No.55 at the Central Experimental Farm

In 1887-8, Chief Dominion Architect Thomas Fuller designed the Museum, laboratories, barn, stables, and Staff Residences on Prince of Wales Drive In 1887, Charles F. Cox lay out of the site and design of farm buildings. In 1887-1888, William John Beckett, a contractor, served as foreman during the building of the residences, offices and barns. 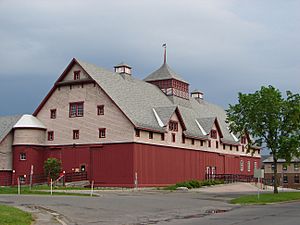 In 1889, livestock was introduced to the CEF. 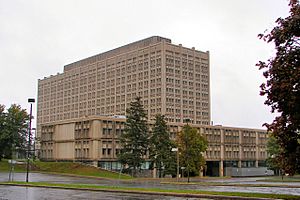 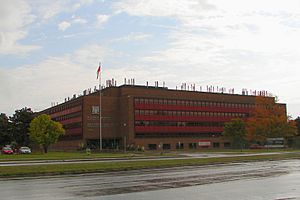 Over the years the scope of research grew and changed, prompting a need to increase the farm's lands and buildings. The Horticulturalist's house and staff residences were removed by the 1930s (they were no longer needed since the city had grown around the farm), the forest belt gradually disappeared, and new larger centralized facilities were built, starting with the Saunders Building in 1935, followed by the Neatby Building, Geophysical Lab, Laboratory Services Building, and the Carling Building.

From 1940-47, building 136, operated as a high frequency Naval Radio Station -CFF which frequently intercepted enemy transmissions. On May 1, 1993, a memorial was erected by NOAC and Royal Canadian Naval Association Ottawa and dedicated to the Naval Veterans and those who served at this station which provided a link during World War II between Canadian naval headquarters and ships at sea, allied naval headquarters and operational naval authorities.

In 1983, the agricultural museum was created in the former Dairy Barn.

The CEF was designated as a National Historic Site in 1998.

In 2003, Public Works and Government Services Canada bought the Skyline office complex on the corner of Merivale and Baseline Roads from Nortel Networks. The complex has been renamed to "NHCAP" (= National Headquarters Complex for the Agriculture Portfolio). The head offices of Agriculture and Agri-Food Canada have been relocated to this facility from the Sir John Carling Building, which was demolished on July 13, 2014.

The CEF housed, prior to its disestablishment on 29 September 2006 by the Harper government, the Canadian Agri-Food Research Council. 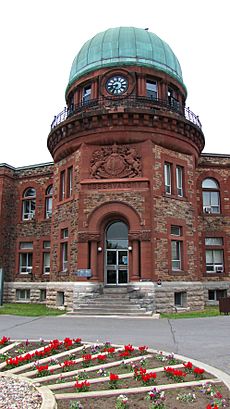 All content from Kiddle encyclopedia articles (including the article images and facts) can be freely used under Attribution-ShareAlike license, unless stated otherwise. Cite this article:
Central Experimental Farm Facts for Kids. Kiddle Encyclopedia.