The Carolinian zone spans across much of the eastern United States, with extensive coverage in the Carolinas, the Virginias, Kentucky, Tennessee, Maryland, Delaware, Pennsylvania, eastern Ohio, parts of New York state, Connecticut, and Rhode Island, as and small parts of southern Michigan, Indiana, and western Ohio. It extends up into Southern Ontario, Canada which is located in the fertile ecozone of the Mixedwood Plains and includes ecodistricts 7E-1 to 7E-6.

Trees found here include various species of ash, birch, chestnut, hickory, oak, and walnut; tallest of all is the tulip tree. Fruit trees native to this zone include the pawpaw. Animal life includes raccoons, possums, squirrels (including the relatively rare southern flying squirrel), nuthatches, and chickadees.

The Carolinian forest in Canada is located at the southern tip of Ontario between Lake Erie, Lake Huron and Lake Ontario. The region contains an extremely high biodiversity of species, over 500 of which are considered rare.

The reason for the high biodiversity in this region is its unique climate; the Carolinian forest of Ontario has the warmest average annual temperatures, the longest frost-free seasons, and the mildest winters of any region in Ontario. This distinctive climate is largely due to the nearby Great Lakes which moderate the temperature of the surrounding land. 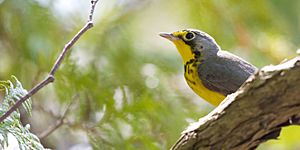 Canada warbler (Cardellina canadensis) who use the Carolinian forests as their breeding grounds.

A Southern flying squirrel (Glaucomys volans) in the branches of a Red maple tree.

The high fertility of the land has seen the region become highly developed and populated, with agricultural, industrial, commercial and urban areas. Today, the Carolinian Zone contains major cities and is home to one quarter of Canada's population despite being 0.25% of the total land area. The deforestation of the region for this development has led to significant habitat loss and fragmentation, leaving the remaining portions of land scattered and disconnected, with some areas still threatened by human development. In total, it is estimated that forest cover has been reduced from 80% to 11.3% while wetlands reduced from 28.3% to 5.1%. In addition to habitat loss and fragmentation, the native Carolinian species are also being threatened by invasive species such as garlic mustard and buckthorn, and overgrazing by White-tailed deer. A list of invasive species in the Carolinian zone can be found here. These factors have contributed to the Carolinian zone becoming the most threatened region in Ontario, with over 125 species of plants and animals listed as either vulnerable, threatened or endangered by the federal or provincial governments. This is over one-third of all vulnerable, threatened or endangered species in Canada. A full list of these species can be found here.

Some parts of the remaining natural area in the Carolinian zone are protected in an effort to conserve the region and its unique, diverse biota. For example, today there are many protected areas including Point Pelee National Park, 21 provincial parks, and many conservation areas. Some of the best preserved areas of Canada's Carolinian forest are located in Windsor's Ojibway Park and Rondeau Provincial Park near Morpeth, Ontario; another is the Niagara Glen Nature Reserve near Niagara Falls, Ontario. There are also organizations like the Carolinian Canada Coalition who aim to restore the region as much as possible. Carolinian forests are complex ecosystems that cannot be replicated in gardens or other small areas. The only way to preserve this unique habitat is continue to keep larger areas of land protected from development and agriculture.

Other conservation efforts have included the reduction of the white-tailed deer population from their peak density of 55 deer km−2 to 7 deer km−2, between the years of 1996-2009. However, studies have found that while this helps reduce further forest damage, continued decline in the forest canopy can still occur, indicating the recovery from overgrazing by herbivores on the forest canopy is a long process without immediate results. Maintaining a lower density of white-tailed deer, while increasing the seed sources of native trees and protecting tree saplings in herbivore exclosures are all suggested ways of helping the Carolinian forest recover or at least conserve what is remaining.

All content from Kiddle encyclopedia articles (including the article images and facts) can be freely used under Attribution-ShareAlike license, unless stated otherwise. Cite this article:
Carolinian forest Facts for Kids. Kiddle Encyclopedia.