The Karner blue (Plebejus melissa samuelis) is an endangered subspecies of small blue butterfly found in some Great Lakes states, small areas of New Jersey, the Capital District region of New York, and southern New Hampshire, where it is the official state butterfly. The butterfly, whose life cycle depends on the wild blue lupine flower (Lupinus perennis), was classified as an endangered species in the United States in 1992.

This subspecies of Plebejus melissa was first identified and described by novelist Vladimir Nabokov. The name originates from Karner, New York (located half-way between Albany and Schenectady) in the Albany Pine Bush, where it was first discovered. In the novel Pnin, Nabokov describes a score of Karner blues without naming them.

Lupine blooms in late May. There are two generations of Karner blues per year, the first in late May to mid June, the second from mid-July to mid-August.

Local conservation efforts, concentrating on replanting large areas of blue lupine which have been lost to development (and to fire suppression, which destroys the open, sandy habitat required by blue lupine), are having modest success at encouraging the butterfly's repopulation. The Necedah National Wildlife Refuge in central Wisconsin is home to the world's largest population of Karner blues, which benefit from its vast area of savanna and extensive lupine.

In May 2000, the Canadian Species at Risk Act listed the Karner blue as being locally extinct in Canada. In 2012, after an unusually hot and dry year, the Karner blue was extirpated in the Indiana Dunes National Park.

The male and female of this small (wingspan of about one inch) butterfly are different in appearance. The topside of the male is silvery or dark blue with narrow black margins. The female is grayish brown, especially on the outer portions of the wings, to blue on the topside, with irregular bands of orange crescents inside the narrow black border. The underside of both sexes is gray with a continuous band of orange crescents along the edges of both wings and with scattered black spots circled with white.

Several studies have found a positive relationship between measures of wild lupine and Karner blue butterfly abundance. However, available evidence suggests that senescent wild lupine is a poor larval food source. The effects of other phenological stages are more ambiguous. In west-central Wisconsin, Karner blue butterfly abundance was negatively associated with the abundance of reproductive lupine and positively related with the frequency of immature wild lupine. However, a feeding trial found that Karner blue butterfly fed 1st year wild lupine had one of the lowest survival rates observed and significantly longer larval durations than larvae fed older wild lupine that did not flower, was flowering, had recently flowered, or was grown in shade and was in seed. In addition, on sites in Wisconsin and Minnesota, the number of 1st flight oviposition sites on nonreproductive and reproductive wild lupine was similar.

Due to effects of environmental variation and differing requirements among life stages, broods, and sexes, Karner blue butterflies require a mosaic of sun and shade.

Adult Karner blue butterfly females are more likely to use shaded habitats than males. Avoiding harassment by males and compromising between greater amounts of wild lupine in open areas and better quality of wild lupine in shaded areas (see below) have been suggested as possible reasons for increased occurrence of females in shade.

Differences between broods have also been observed. In west-central Wisconsin, abundance of spring adults positively correlated with decreasing canopy cover, while correlation with summer adults was very weak. At Indiana Dunes National Park, cover at late summer oviposition sites was significantly higher than at late spring oviposition sites. In Wisconsin and Minnesota, late spring oviposition sites occurred in partial and closed habitats significantly more than expected based on the number of nectar flowers and the cover and number of wild lupine stems, while summer oviposition sites did not differ significantly from expected. The different brood responses to shade may be due to the direct impact of varying environmental conditions over the course of the season on Karner blue butterflies (see section "Temperature") and the associated effects on wild lupine (see below).

On sites in Wisconsin and Minnesota, canopy cover did not have a significant (p>0.06) effect on total numbers of ants, parasitoids, or predators. However, certain species did show trends across canopy cover categories. For instance the ant Formica nitidiventris was only seen in open (≤15% cover) areas, while another ant, Dolichoderus plagiatus was only observed in areas with a dense canopy (≥76% cover). Parasitoids in the genera Phaeogenes and Orthostigma were all seen in closed habitats, while 90% of damsel bugs (Nabicula subcoleoptrata), a potential predator, were observed in open areas. Closed habitats had insignificantly (p=0.116) more parasitoids on average than partial (16%–75% cover) and closed habitats.

Other habitat characteristics: Although Schweitzer asserts that the presence of litter is important to Karner blue butterflies in some years, abundance in a right-of-way in west-central Wisconsin was negatively (p<0.05) related with average litter cover.

Karner blue butterflies may be associated with disturbance. Although results may have been biased by a significant (p=0.009) positive correlation (r=0.2173) between patch area and number of disturbances (such as burning, vehicle traffic, and thinning and clearing), patches in a right-of-way in west-central Wisconsin occupied by Karner blue butterflies had a greater frequency of disturbance than unoccupied patches (p≤0.0125). In the same area, the abundance of the Karner blue butterfly spring brood was positively related to trails, and the percent of lupine stems with larval feeding damage was significantly (p<0.05) greater in areas disturbed by military vehicle traffic.

Temperature also influences Karner blue butterfly phenology and brood success. Weather had strong influence on Karner blue butterfly phenology at Fort McCoy in west-central Wisconsin. In a cool year the 2nd-brood flight began 6 June, while in a warmer year adults were 1st detected on 22 May. In addition, compared to the previous year the flight of the 2nd-brood during the hot year was shortened by 20 days. At Indiana Dunes National Park, evidence suggests that cool winters negatively impact 1st-brood populations and cool summers positively affect 2nd-brood populations. A review suggests that the cover provided by snowpack protects Karner blue butterfly eggs from hatching prematurely or being overheated by direct sunlight. Therefore, short periods of continuous snow cover due to site conditions or mild winters could result in decreased occurrence or smaller populations of Karner blue butterflies.

Karner blue butterflies are dependent on heterogeneous habitat as it provides the varied requirements of different Karner blue butterfly broods, sexes, and life stages over a wide range of environmental conditions. Research at Indiana Dunes National Park led to recommendations for canopy openings for adult males and nectaring of both sexes, as well as areas with 30-60% cover for ovipositing females. In the Allegan State Game Area, wild lupine patches occupied by Karner blue butterflies had higher density of edge habitats that unoccupied wild lupine patches. In west-central Wisconsin the importance of shaded habitat led to a recommendation that 20% to 40% of Karner blue butterfly habitat provide shaded lupine and that 1/3 have >60% canopy cover with succession in these dense areas allowed to progress to complete closure. Maxwell also suggests avoiding any management that would result in habitat homogenization. The Karner blue butterfly recovery team mentions the importance of a wide range of aspects, hydrology, microtopography as well canopy cover (0-90%) in conserving the Karner blue butterfly. However, Karner blue populations can persist in relatively homogenous habitats. For instance, a population has persisted at the Saratoga Airport in New York in open habitat maintained by regular mowing. More information on the habitat characteristics, environmental conditions, and/or geographic variability in habitat requirements that facilitate Karner blue butterfly's persistence in these areas is needed.

Size of habitat patches can also influence Karner blue butterfly abundance (see section "Wild lupine"). At the Allegan State Game Area, wild lupine patches occupied by Karner blue butterflies were larger than unoccupied patches. This was also the case at Fort McCoy in Wisconsin. In addition to the effect of amount of wild lupine, a review suggests that it is easier to maintain Karner blue butterfly habitat in larger patches. Lane notes the need to find a balance between having patches of different required habitats within the activity range of Karner blue butterflies and having open areas large enough that they do not become shaded too quickly. Canopy openings with diameters of at least 82 feet (25 m) were recommended based on research at Indiana Dunes National Park, and research in Wisconsin and Minnesota led to a recommended opening size of 1.5 times the height of adjacent trees. According to a review, subpopulations in habitat patches of less than 0.25 ha (0.62 acres) are vulnerable to extirpation.

The presence of dispersal corridors may assist with Karner blue butterfly dispersal. Karner blue butterflies appear to disperse further in open habitats (see section "Timing of major life history events"). However, there is uncertainty regarding what constitutes a corridor or a barrier to dispersal. Creation of corridors with both lupine for larvae and nectar species for adults may be useful in connecting habitat patches. 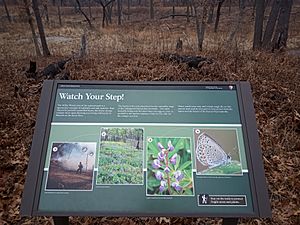 According to reviews, habitat loss through direct conversion to other land uses and through succession are considered the major causes of the decline of the Karner blue butterfly. At the time of this writing (2006), two reviews summarize the recent status of Karner blue butterfly across its range. Recovery criteria are addressed by, while Christenson and Lentz discuss lessons learned developing a statewide Habitat Conservation Plan for Wisconsin.

Heterogeneity is an important feature of Karner blue butterfly habitat. Specific recommendations regarding the spatial arrangement of the various required habitat types and Karner blue butterfly habitat patches are discussed in Landscape effects. Creation and rotation of management units should incorporate this information as well as data on Karner blue butterfly movement (see section "Timing of major life history events"). Bidwell recommends management units be a maximum of 1,300 to 1,600 feet (400–500 m) wide to improve recolonization from neighboring areas. Depending on the available and surrounding habitat, managing for heterogeneity could mean implementing a wide range of techniques.

All content from Kiddle encyclopedia articles (including the article images and facts) can be freely used under Attribution-ShareAlike license, unless stated otherwise. Cite this article:
Karner blue Facts for Kids. Kiddle Encyclopedia.