Kids Encyclopedia Facts
This page is about River in Ontario. For the river in Minnesota, see Credit River (Minnesota).

The Credit River is a river in southern Ontario, which flows from headwaters above the Niagara Escarpment near Orangeville and Caledon East to empty into Lake Ontario at Port Credit, Mississauga. It drains an area of approximately 1,000 square kilometres (390 sq mi). The total length of the river and its tributary streams is over 1,500 kilometres (930 mi).

Despite urbanization and associated problems with water quality on the lower section of this river, it provides spawning areas for Chinook salmon and rainbow trout. There is a fish ladder on the river at Streetsville. Much of the river can still be travelled by canoe or kayak. The headwaters of the Credit River is home to a native self-sustaining brook trout population and an introduced brown trout population. 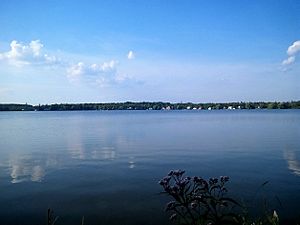 Caledon Lake lies in the Headwaters of Credit River

Forks of the Credit Provincial Park is located on the upper part of the river between Brampton and Orangeville, and is near the Bruce Trail.

Communities in the river's watershed include the following:

The river became known as Missinnihe (Eastern Ojibwa: "trusting creek") to the Mississaugas First Nation who met annually with white traders there. To the First Nations, the river was "held in reverential estimation as the favourite resort of their ancestors" and the band, which ranged from Long Point on Lake Erie to the Rouge River on Lake Ontario, became known as the Credit River Indians. Their descendants are today the Mississaugas of the New Credit First Nation.

The origins of the English name come from the time when French fur traders supplied goods to the native people in advance (on credit) against furs which would be delivered the following spring. It was known as the Rivière au Crédit. The trading post was set up at the mouth of the river, in Port Credit, in the early 18th century.

Watershed population and land use

The Credit River is home to a wide range of wildlife. Some species are permanent or seasonal residents while others are sighted occasionally. This watershed is home to 1,330 plant species, 64 fish species (including many bait fish, pike, and brook trout), 41 mammal species, 5 turtle species, 8 snake species, 17 amphibian species, and 244 bird species.

List of major roadways crossing over the Credit in Peel Region:

Only the QEW spans and the Old Derry Road bridges have historic significance as the rest were basic bridges built since the mid 20th Century.

All content from Kiddle encyclopedia articles (including the article images and facts) can be freely used under Attribution-ShareAlike license, unless stated otherwise. Cite this article:
Credit River Facts for Kids. Kiddle Encyclopedia.