Kids Encyclopedia Facts
Not to be confused with Haldon Hills.

Halton Hills is a town in the Regional Municipality of Halton, located in the northwestern end of the Greater Toronto Area, Ontario, Canada.

There are also natural features within these bounds, including the Niagara Escarpment, and the Bruce Trail. Many of these local features are protected by the Conservation Halton, Credit Valley Conservation & Grand River Conservation Authority. 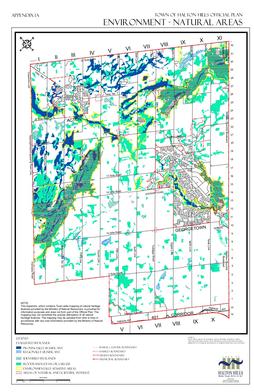 The town is bisected by the Niagara Escarpment from southwest to northeast, and a significant portion of the rural area is located within the provincial Greenbelt. Above the Escarpment, a large proportion of the rural area is classified as environmentally sensitive wetlands, and there are several sites that are licensed for aggregate extraction, for which expansion requires detailed environmental assessment. Below the Escarpment, the rural area is mainly agricultural, with the exception of an industrial area currently being development between Highway 401 and Steeles Avenue.

The Water Survey of Canada operates two hydrometric monitoring stations in the town, on the Black Creek below Acton, and at Norval on the Credit River.

Halton Hills is located in the transition zone between the Huron-Ontario Forest Section of the Great Lakes-St. Lawrence forest zone to the north and the Niagara Section of the Carolinian forest zone to the south. Both forest zones are part of the Mixedwood Plains Ecozone. The natural vegetation in the Huron-Ontario Section is dominated by mixed wood forests. It is a transitional type between the southern deciduous forests and the northern coniferous forests. The forest communities of the Niagara Section are dominated by broad-leaved trees. Overall, Halton Hills consists predominantly of agricultural lands with scattered woodlands and wetlands. The woodlands are mainly deciduous forest and the wetlands are either cedar swamp or cattail marsh.

American ginseng exists in the town, and is protected under the Endangered Species Act, 2007. Butternut trees are also threatened by the butternut canker. The hooded warbler and the Jefferson salamander are also designated as threatened species.

Brook trout had been eliminated from the Black Creek watershed for many years, following an environmental disaster south of Acton in March 1946. The trout have since returned, and anglers report that fishing is good.

The physiography and distribution of surface material in the Town of Halton Hills are the result of glacial activity which took place in the Late Wisconsinan Substage of the Pleistocene Epoch. This period of time, which lasted from approximately 23,000 to 10,000 years ago, was marked by the repeated advance and melting back of massive, continental ice sheets.

The Niagara Escarpment dominates the physiography of the town and greatly influenced the pattern of glaciation in the region. The Escarpment, formed by erosion over millions of years, is a high relief bedrock scarp which trends to the north through the central part of the town. To the west, on the upper surface of the Escarpment, hummocky morainic ridges deposited by glacial ice form part of the Horseshoe Moraines physiographic region. To the southeast below the Escarpment, is a smooth glacial till plain partially bevelled by lacustrine action, which forms part of the South Slope and Peel Plain physiographic regions.

The Town of Halton Hills is underlain by Ordovician shales of the Queenston Formation east of the Niagara Escarpment, and by Silurian dolostones of the Amabel Formation west of the Escarpment. The escarpment face exposes a complex succession of shales, sandstones, limestones and dolostones of the Clinton and Cataract Groups. Red shales of the Queenston Formation underlie the eastern half of the town and are generally covered by more than 15 m of glacial sediments, predominantly the Halton Till. There are several areas of thin drift cover south of Georgetown.

The quarrying of limestone has been undertaken since the 19th century, and the lime industry was once quite prevalent. In 1886, the Toronto Lime Company had operations in Limehouse and Acton, employing a total of four draw kilns and eleven set kilns, producing common lime and water lime. At Limehouse, rock from the Clinton formation yielded green and brown shales and blue marl, which were used in the manufacture of mineral paints.

Small oil and gas deposits have been discovered northwest and south of Acton, and around Hornby. While exploration had occurred as early as 1908, with oil being discovered in 1912, significant strikes did not occur until 1954.

The town is located in an area that is considered to be of low seismic potential, and the largest recent earthquake to take place within its limits was of magnitude 3 on 29 June 1955. There is a POLARIS seismic monitoring station located just west of Acton.

Religiously, most people in Halton Hills identify or affiliate either with Christianity (72.1%), or with no religion (26.3%). The remaining 1.6% affiliate with another religion.

The town has four main roads: 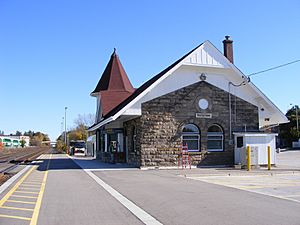 Bus service is provided by GO Transit along Highway 7 on its Georgetown line corridor. Via Rail and GO Train service are provided at Georgetown GO Station.

The Grand Trunk Railway brought train service to the area in 1856, with stations at Acton and Georgetown. Passenger service to Acton ceased in the 1990s, but GO Train service is planned to be revived there in 2013.

Rail freight service is also provided by Canadian National on its Halton Subdivision from Georgetown southwest through Milton to Burlington. CN's Guelph Subdivision between Georgetown and London is currently managed by Goderich–Exeter Railway.

From 1917 to 1931, Norval, Georgetown and Acton were also served by the Toronto Suburban Railway.

All content from Kiddle encyclopedia articles (including the article images and facts) can be freely used under Attribution-ShareAlike license, unless stated otherwise. Cite this article:
Halton Hills Facts for Kids. Kiddle Encyclopedia.