Juglans cinerea, commonly known as butternut or white walnut, is a species of walnut native to the eastern United States and southeast Canada.

The distribution range of J. cinerea extends east to New Brunswick, and from southern Quebec west to Minnesota, south to northern Alabama and southwest to northern Arkansas. It is absent from most of the Southern United States. The species also proliferates at middle elevations (about 2,000 ft or 610 m above sea level) in the Columbia River basin, Pacific Northwest; as an off-site species. Trees with 7 ft or 2.1 m (over mature) class range diameter at breast height were noted in the Imnaha River drainage as late as January 26, 2015. Butternut favors a cooler climate than black walnut and its range does not extend into the Deep South. Its northern range extends into Wisconsin and Minnesota where the growing season is too short for black walnut. 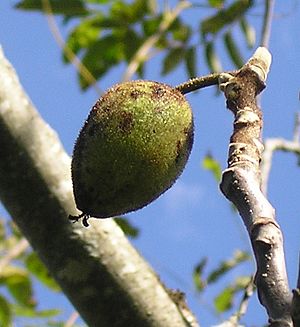 Like other members of the family Juglandaceae, butternut's leafout in spring is tied to photoperiod rather than air temperature and occurs when daylight length reaches 14 hours. This can vary by up to a month in the northern and southernmost extents of its range. Leaf drop in fall is early and is initiated when daylight drops to 11 hours. The species is monoecious. Male (staminate) flowers are inconspicuous, yellow-green slender catkins that develop from auxiliary buds and female (pistillate) flowers are short terminal spikes on current year's shoots. Each female flower has a light pink stigma. Flowers of both sexes do not usually mature simultaneously on any individual tree. 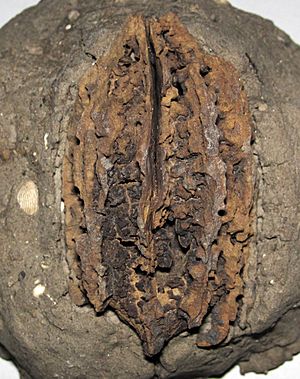 Butternut grows best on stream banks and on well-drained soils. It is seldom found on dry, compact, or infertile soils. It grows better than black walnut, however, on dry, rocky soils, especially those of limestone origin. Butternut's range includes the rocky soils of New England where black walnut is largely absent.

Butternut is found most frequently in coves, on stream benches and terraces, on slopes, in the talus of rock ledges, and on other sites with good drainage. It is found up to an elevation of 1,500 metres (4,900 ft) in the Virginias – much higher altitudes than black walnut. The nuts are eaten by wildlife.

Although young trees may withstand competition from the side, butternut does not survive under shade from above. It must be in the overstory to thrive. Therefore, it is classed as intolerant of shade and competition. 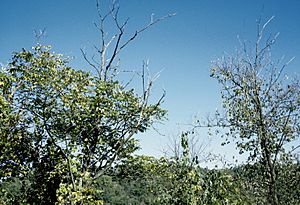 The most serious disease of J. cinerea is butternut decline or butternut canker. In the past, the causal organism of this disease was thought to be a fungus, Melanconis juglandis. Now this fungus has been associated with secondary infections and the primary causal organism of the disease has been identified as another species of fungus, Sirococcus clavigignenti-juglandacearum. The fungus is spread by wide-ranging vectors, so isolation of a tree offers no protection.

Butternut canker first entered the United States around the beginning of the 20th century, when it arrived on imported nursery stock of Japanese walnut.

Symptoms of the disease include dying branches and stems. Initially, cankers develop on branches in the lower crown. Spores developing on these dying branches are spread by rainwater to tree stems. Stem cankers develop 1 to 3 years after branches die. Tree tops killed by stem-girdling cankers do not resprout. Diseased trees usually die within several years. Completely free-standing trees seem better able to withstand the fungus than those growing in dense stands or forest. In some areas, 90% of the butternut trees have been killed. The disease is reported to have eliminated butternut from North and South Carolina. The disease is also reported to be spreading rapidly in Wisconsin. By contrast, black walnut seems to be resistant to the disease.

Bunch disease also attacks butternut. Currently, the causal agent is thought to be a mycoplasma-like organism. Symptoms include a yellow witches' broom resulting from sprouting and growth of auxiliary buds that would normally remain dormant. Infected branches fail to become dormant in the fall and are killed by frost; highly susceptible trees may eventually be killed. Butternut seems to be more susceptible to this disease than black walnut.

The common grackle has been reported to destroy immature fruit and may be considered a butternut pest when populations are high.

Butternut is very susceptible to fire damage, and although the species is generally wind firm, it is subject to frequent storm damage.

The species is not listed as threatened federally in the US, but is listed as "Special Concern" in Kentucky, "Exploitably Vulnerable" in New York State, and "Threatened" in Tennessee.

The Committee on the Status of Endangered Wildlife in Canada placed the butternut on the endangered species list in Canada in 2005.

Approximately 60 grafted butternut trees were planted in a seed orchard in Huntingburg, Indiana in 2012 as part of a larger effort by the USDA Forest Service to conserve the species and to breed resistance to butternut canker disease. Forest Service staff from the Hoosier National Forest, the Eastern Region National Forest genetics program, the Northern Research Station, and the Hardwood Tree Improvement and Regeneration Center at Purdue University are involved in the project.

In Louisa May Alcott's Little Men (1871) the two youngest boys, Rob and Teddy, have an amusing running battle with the squirrels over collecting the butternuts.

The Bush butternut tree was planted by settler George Bush (1845) in current Tumwater, Washington, brought from Missouri. As of 2019[update], this tree is still alive. 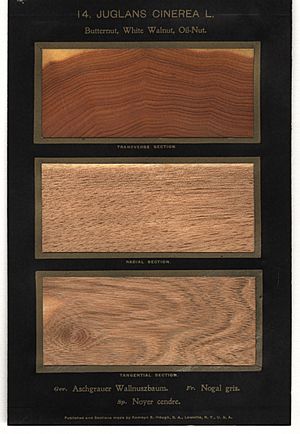 Cross-sections from The American Woods

The butternuts are edible and were made into oil by Native Americans for various purposes, including anointment. The husks contain a natural yellow-orange dye.

Butternut wood is light in weight and takes polish well, and is highly rot resistant, but is much softer than black walnut wood. Oiled, the grain of the wood usually shows much light. It is often used to make furniture, and is a favorite of woodcarvers.

Butternut bark and nut rinds were once often used to dye cloth to colors between light yellow and dark brown. To produce the darker colors, the bark is boiled to concentrate the color. This appears to never have been used as a commercial dye, but rather was used to color homespun cloth.

In the mid-19th century, inhabitants of areas such as southern Illinois and southern Indiana – many of whom had moved there from the Southern United States – were known as "butternuts" from the butternut-dyed homespun cloth that some of them wore. Later, during the American Civil War, the term "butternut" was sometimes applied to Confederate soldiers. Some Confederate uniforms apparently faded from gray to a tan or light brown. It is also possible that butternut was used to color the cloth worn by a small number of Confederate soldiers. The resemblance of these uniforms to butternut-dyed clothing, and the association of butternut dye with home-made clothing, resulted in this derisive nickname.

Crushed fruits can be used to poison fish, though the practice is illegal in most jurisdictions. Bruised fruit husks of the closely related black walnut can be used to stun fish.

All content from Kiddle encyclopedia articles (including the article images and facts) can be freely used under Attribution-ShareAlike license, unless stated otherwise. Cite this article:
Butternut Facts for Kids. Kiddle Encyclopedia.