Huntingburg is a city in Patoka Township, Dubois County, in the U.S. state of Indiana. The population was 6,362 at the 2020 census, just less than half the size of a neighboring city in Dubois County, Jasper.

Located in southwestern Indiana, the city is known for its downtown with numerous antique shops. It is part of the Jasper Micropolitan Statistical Area. The city is also known as the "Hollywood of the Midwest." The movies A League of Their Own (1992), Hard Rain (1998), and the HBO film Soul of the Game (1996) were filmed in Huntingburg. Columbia Pictures renovated the grandstand at League Stadium that was to become part of the set for A League of Their Own.

League Stadium was home to the Dubois County Dragons who played in the Heartland League (1996–1998) and the Frontier League (1999–2002). From 1996 to 2001, Huntingburg was the smallest city to host a professional baseball team. After the Dragons franchise moved, Jeff Martindale League Stadium stood empty in the summers until the Bluff City Bombers of the Central Illinois Collegiate League moved to Huntingburg in 2005 and were renamed the Dubois County Bombers. The CICL then merged with the Prospect League. As the Prospect League has a larger geographical footprint, the Bombers moved to the Ohio Valley League as of the 2013 season.

Huntingburg was platted in 1837 by Colonel Jacob Geiger who purchased 1,920 acres (7.8 km2) of land and became one of the city's first permanent settlers. It was likely so named because the site had been a popular hunting ground. Huntingburg was incorporated as a town in 1866.

The Huntingburg Commercial Historic District and Huntingburg Town Hall and Fire Engine House are listed on the National Register of Historic Places.

The Huntingburg post office has been in operation since 1842.

As part of Dubois County, Huntingburg re-entered the Eastern Time Zone on November 4, 2007 after 15 months on the Central Time Zone. 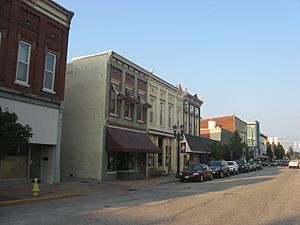 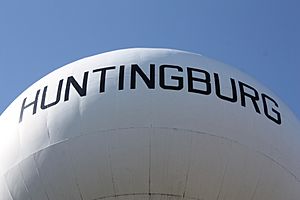 Persons in poverty were 15.2% of the population.

Huntingburg Airport is a public use airport located three nautical miles (6 km) south of the central business district of Huntingburg. It is owned by the Dubois County Airport Authority.

In 1972, the school system of Holland, a town west of Huntingburg along State Road 161, was consolidated into that of Huntingburg, resulting in the formation of Southwest Dubois County School Corporation, which includes the following schools:

The town has a free lending library, the Huntingburg Public Library.

All content from Kiddle encyclopedia articles (including the article images and facts) can be freely used under Attribution-ShareAlike license, unless stated otherwise. Cite this article:
Huntingburg, Indiana Facts for Kids. Kiddle Encyclopedia.