The red-bellied woodpecker (Melanerpes carolinus) is a medium-sized woodpecker of the family Picidae. It breeds mainly in the eastern United States, ranging as far south as Florida and as far north as Canada. Its common name is somewhat misleading, as the most prominent red part of its plumage is on the head; the red-headed woodpecker, however, is another species that is a rather close relative but looks quite different.

The English naturalist Mark Catesby described and illustrated the red-bellied woodpecker in his book The Natural History of Carolina, Florida and the Bahama Islands which was published between 1729 and 1732. Catesby used the English name "The Red-bellied Wood-pecker" and the Latin Picus ventre rubro. When in 1758 the Swedish naturalist Carl Linnaeus updated his Systema Naturae for the tenth edition, he included the red-bellied woodpecker, coined the binomial name Picus carolinus and cited Catesby's book. Linnaeus specified the type locality as America septentrionali, (North America). The locality is now restricted to South Carolina. The red-bellied woodpecker is one of 24 species now placed in the genus Melanerpes that was introduced by the English ornithologist William John Swainson in 1832. The species is monotypic: no subspecies are recognised. 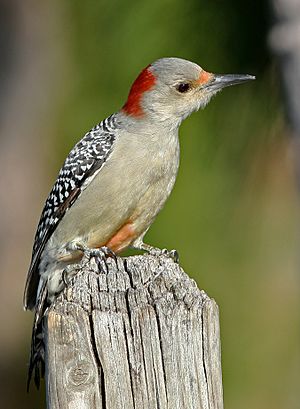 Red-bellied woodpeckers are noisy birds, and have many varied calls. Calls have been described as sounding like churr-churr-churr or thrraa-thrraa-thrraa with an alternating br-r-r-r-t sound. Males tend to call and drum more frequently than females, but both sexes call. The drum sounds like 6 taps. Often, these woodpeckers "drum" to attract mates. They tap on hollow trees, and even on aluminum roofs, metal guttering and transformer boxes in urban environments, to communicate with potential partners. Babies have a high-pitched begging call of pree-pree-pree. They will continue to give a begging call whenever they see their parents for a while after fledging.

These birds mainly search out arthropods on tree trunks. They may also catch insects in flight. They are omnivores, eating insects, fruits, nuts and seeds. Their breeding habitat is usually deciduous forests. They nest in the decayed cavities of dead trees, old stumps, or in live trees that have softer wood such as elms, maples, or willows; both sexes assist in digging nesting cavities. Areas around nest sites are marked with drilling holes to warn others away.

Though the species is not globally threatened, it depends on large trees for nesting. In areas that are extensively deforested, the birds will sometimes utilize gardens, but for the most part they simply will not be present in any numbers. 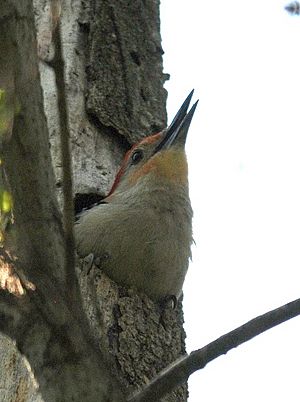 Peeking out of its nest 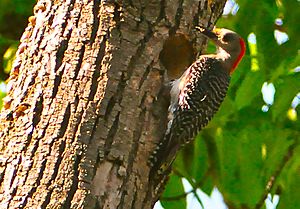 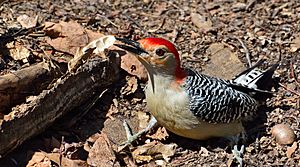 Researchers have documented that red-bellied woodpeckers have the tendency to nest in clear areas with only few trees. Studies have indicated that close canopy areas does not impact the bird's nesting behavior; however, further studies are needed and are in progress. Red-bellied woodpeckers are territorial during the nesting season and they breed once per year. A pair-breeding woodpecker begins nesting in April or May holding a year-round territories and showing high site fidelity.

All content from Kiddle encyclopedia articles (including the article images and facts) can be freely used under Attribution-ShareAlike license, unless stated otherwise. Cite this article:
Red-bellied woodpecker Facts for Kids. Kiddle Encyclopedia.