The 1931 flood in China in Hankow City

A flood is an overflow of water on land which is usually dry.

Sometimes a river receives too much extra water, either from heavy rain or other natural disasters. When this happens, the water overflows from its normal path in the river bed and onto dry land. This is called a flood. Flash floods happen quickly. Extreme flooding can also be caused by a tsunami or a large storm that will cause the sea to surge inland.

During a flood, people should move themselves and their most precious belongings to higher ground quickly. The process of leaving homes in search of a safe place is called evacuation. 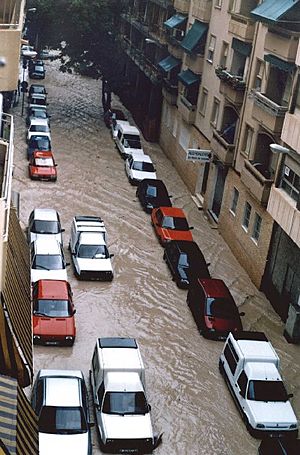 During a flood there is plenty of water, but it is mostly polluted and not safe to drink. If people drink the dirty water, they may suffer from diseases such as typhoid and cholera. People can get ready to survive a flood by filling many containers with fresh and clean drinking water and storing other emergency supplies.

Flooding is usually caused by a volume of water within a body of water, such as a lake, overflowing. The result is that some of the water travels to land, and 'floods' the area. Floods can also occur in rivers, when the strength of the river is so high it flows out of the river channel, particularly at bends or meanders and causes damage to homes and businesses alongside the river. While flood damage can be prevented by moving away from rivers and other lakes, people have lived and worked by the water to seek sustenance, and capitalize on the gains of cheap and easy travel and commerce easily, by being near water.

In 2010 and 2011, Queensland floods hurt Australia's Gross Domestic Product (GDP) by wiping as much as $9 billion off export revenues.

Operations at about 40 coal mines in central Queensland's Bowen Basin were disrupted because of the floods. Crops were damaged and grazing lands were underwater.