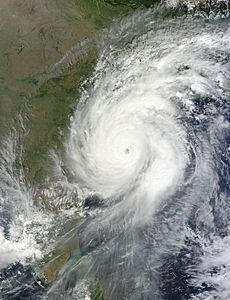 Cyclone Hudhud was a very severe cyclonic storm. The storm originated in the northern Indian Ocean. The cyclone killed over 100 people across India. Its winds were near 130 mph. It struck in October 2014.

All content from Kiddle encyclopedia articles (including the article images and facts) can be freely used under Attribution-ShareAlike license, unless stated otherwise. Cite this article:
Cyclone Hudhud Facts for Kids. Kiddle Encyclopedia.