County of Brant facts for kids

The County of Brant (2016 population 36,707) is a single-tier municipality in the Canadian province of Ontario. Despite its name, it is no longer a county by definition, as all municipal services are handled by a single level of government. The county has service offices in Burford, Paris and St. George.

It is a predominantly rural municipality in Southern Ontario. It is bordered by the Region of Waterloo, the City of Hamilton, Haldimand County, Norfolk County, and Oxford County. The County abuts the Greenbelt. 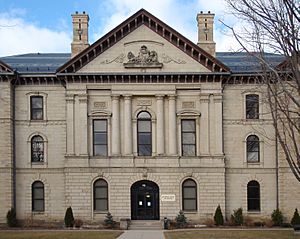 The area had previously been part of Wentworth & Oxford County. Brant County was formed in 1851 and originally consisted of:

In 1999, the county was reorganized and all its individual municipalities, except Brantford, were amalgamated into a single-tier municipality with city status. As of December 31, 1998, all of the original townships were still intact, except for the incorporation of the Town of Paris.

Local organizations include the Kinsmen Club of Brantford is an all Canadian non-profit service organization that promotes service, fellowship, positive values, and national pride. They put on the Brantford Kinsmen Annual Car Show & Swap Meet in Paris Ontario in September and the Brantford Kinsmen Annual Ribfest in Brantford, Ontario to help raise funds for local charities. And Sustainable Brant dedicated to saving the disappearing farmland.

The County of Brant Public Library is the public library serving the communities in the county of Brant, Ontario, Canada. It has 5 branches located in Paris, Burford, Scotland, St. George, and Glen Morris, Ontario. The system's main branch, in Paris, Ontario, was originally a Carnegie Library, having received an endowment from Carnegie in 1902. The County of Brant Public Library maintains a Digital Historical Collection pertaining to Brant history at http://images.ourontario.ca/brant 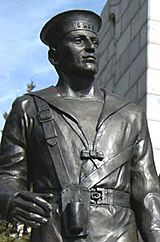 The Album of Honour for Brant County is a book compiled in 1946 by the Kinsmen Club of Brantford to commemorate those of Brantford, the County of Brant and the peoples of the Six Nations who served Canada during the Second World War. The book lists the names of the Brant County men and women who served in World War II. There are more than 3,500 photographs. In addition, local companies provided the names of employees who served in this war. The book is kept on the Digital Archives Page at the Brantford Public Library.

All content from Kiddle encyclopedia articles (including the article images and facts) can be freely used under Attribution-ShareAlike license, unless stated otherwise. Cite this article:
County of Brant Facts for Kids. Kiddle Encyclopedia.