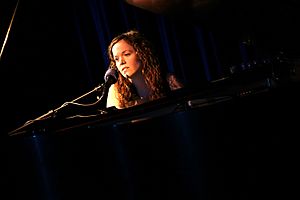 Allison Crowe (November 16, 1981, British Columbia) is a Canadian singer, songwriter, guitarist and pianist. Most of the songs she records are written by Crowe. She is known as well for releasing cover versions of certain songs. She is known for releasing independent albums. Cover songs include the Beatles' Let it Be and Imagine from John Lennon. Her distinctive voice is often compared against that of Mahalia Jackson. She appeared in a cameo role in the 2013 movie Man of Steel.

All content from Kiddle encyclopedia articles (including the article images and facts) can be freely used under Attribution-ShareAlike license, unless stated otherwise. Cite this article:
Allison Crowe Facts for Kids. Kiddle Encyclopedia.