Brion Island (French: Île Brion) is a currently uninhabited island in the Magdalen Islands archipelago in the middle of the Gulf of Saint Lawrence and part of the municipality of Grosse-Île, Gaspésie–Îles-de-la-Madeleine, Quebec, Canada. It is the most northeast of the islands in the Magdalen archipelago, apart from the Bird Rocks (Rochers aux Oiseaux) twenty kilometres (12 miles) east-north-east.

Passing by the island in 1534, Jacques Cartier erected his second cross and named the island ille de Bryon after his principal expeditionary patron Philippe de Chabot, Seigneur de Brion and Admiral of France.

Haldimand Cliff (Falaise Haldimand), named for Frederick Haldimand, is on the southeast coast of the island. 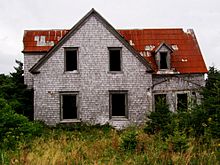 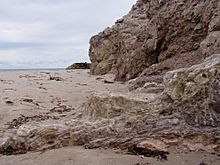 All content from Kiddle encyclopedia articles (including the article images and facts) can be freely used under Attribution-ShareAlike license, unless stated otherwise. Cite this article:
Brion Island Facts for Kids. Kiddle Encyclopedia.