Kids Encyclopedia Facts
Not to be confused with Grosse Isle, Quebec, an island of the Isle-aux-Grues archipelago.

Located on Grosse Île (French for Big Island) between Les Îles-de-la-Madeleine's villages of Grande-Entrée (south) and House Harbour (southwest), it was settled during the late 18th century by Scots. French-speaking people would come and establish themselves just after, as seen by a Catholic parish founded in 1793. Today, Grosse-Île remains one of three communities of the archipelago to be predominantly English-speaking, the other being Entry Island and Old Harry (a hamlet part of Grosse-Île on Big Entry Island). 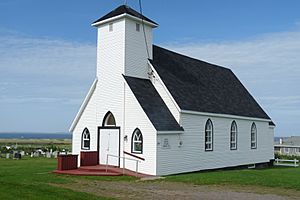 All content from Kiddle encyclopedia articles (including the article images and facts) can be freely used under Attribution-ShareAlike license, unless stated otherwise. Cite this article:
Grosse-Île, Quebec Facts for Kids. Kiddle Encyclopedia.