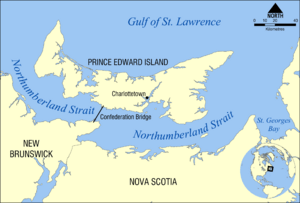 Map of the Northumberland Strait.

The Northumberland Strait (French: détroit de Northumberland) is a strait in the southern part of the Gulf of Saint Lawrence in eastern Canada. The strait is formed by Prince Edward Island and the gulf's eastern, southern, and western shores.

The Northumberland Strait varies in depth between 17 and 65 metres, with the deepest waters at either end. The tidal patterns are complex; the eastern end has the usual two tides per day, with a tidal range of 1.2 to 1.8 metres, while the western end effectively has only one tide per day.

There are many sandy beaches along both the northern and southern coasts of the strait. These beaches, found in New Brunswick, Prince Edward Island, and Nova Scotia, are very popular with tourists.

During the winter months between December and April, sea ice covers the entire strait and Gulf of St. Lawrence.

While the western shores of Cape Breton Island and northeastern shores of the Nova Scotia peninsula are dominated by granite, sedimentary rocks along the central and western parts of the strait, as well as the entire south shore of Prince Edward Island, consist of sandstone, lending to beautiful sandy beaches with minimal coastal development. The largest island in the strait is Pictou Island. 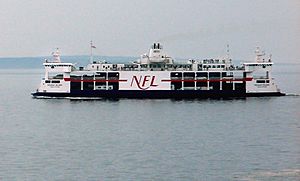 The Northumberland Strait is a minor shipping route, with ports such as Pugwash shipping salt, Summerside, Charlottetown, Georgetown and Souris shipping agricultural products and receiving petroleum and aggregate, and Pictou shipping forestry products and general cargo. Shipping has declined in recent decades with the decline of rail service to ports and the increased capacity of highways to larger ports outside of the Gulf of St. Lawrence, which freezes in the winter.

Cruise ships regularly visit Charlottetown during summer and fall, and since 2012 a few smaller cruise ships have been visiting Pictou, NS.

The narrowest part of the strait, the 13-kilometre (7–nautical mile) wide Abegweit Passage in the western part of the strait between Borden-Carleton, Prince Edward Island and Cape Jourimain, New Brunswick, is now spanned by the Confederation Bridge.

All three ferry services are located in the eastern end of the strait and operate during the ice-free months from May - December.

There was a year-round ferry service that operated in the central/western part of the strait across Abegweit Passage between Port Borden, Prince Edward Island and Cape Tormentine, New Brunswick. This service operated from October 1917 until May 1997. Owned by the Government of Canada, it was one of Canada's busiest ferry services and was operated by various federal Crown corporations (Canadian National Railways, CN Marine, Marine Atlantic). The ferry service was replaced by the Confederation Bridge when it opened on 31 May 1997.

Maritime Electric supplies electricity to customers in Prince Edward Island. Although the utility does have some electrical generation facilities, since the mid-1970s the majority of Prince Edward Island's electricity has been purchased from NB Power and supplied via an interprovincial electrical interconnection. This interconnection consisted of two 23 km (14 mi) 138 kilovolt oil-filled submarine transmission cables installed 1975-78 under the Northumberland Strait at the western end of the Abegweit Passage between Murray Corner, New Brunswick and Fernwood, Prince Edward Island. Since the Northumberland Strait freezes in winter, the cables were designed to be protected from ice scouring and were copied from a Swedish design that was originally used to supply the island of Gotland in the Baltic Sea. They were replaced in 2017 by two new cables providing a capacity of 300 MW.

The first documented single crossing of Abegweit Passage (approximately 14 kilometres (7.6 nmi)) with assistance was made by Evelyn Henry of Keppoch, PEI on July 15, 1951 when she swam from Cape Tormentine, NB to Borden, PEI in 8 hours, 47 minutes.

There have been two documented single-day double crossings of Abegweit Passage (approximately 27 kilometres (15 nmi)) with assistance to date:

The first, and to date only, documented single crossing with assistance across the eastern end of the strait (approximately 24.5 kilometres (13.2 nmi) was made by Jill Leon of Charlottetown, PEI on July 31, 2013 when she swam from Caribou, NS to Wood Islands, PEI in 9 hours, 48 minutes.

The strait is famous in folklore circles for regular sightings of the Ghost Ship of Northumberland Strait, a flaming vessel which appears in the middle of the strait. The strait is also notable for the ice boats, small oared boats which made regular dangerous crossings of the strait in winter carrying mail and passengers before the era of ice breaking ferries.

All content from Kiddle encyclopedia articles (including the article images and facts) can be freely used under Attribution-ShareAlike license, unless stated otherwise. Cite this article:
Northumberland Strait Facts for Kids. Kiddle Encyclopedia.