Shediac (Shédiac in French) is an Acadian town in Westmorland County, New Brunswick. The town is home to the famous Parlee Beach and is known as the "Lobster Capital of the World". It hosts an annual festival every July which promotes its ties to lobster fishing. At the western entrance to the town is a 90-ton sculpture called The World's Largest Lobster. It is believed that chiac, a well-known French accent, was named after Shediac.

Shediac is situated primarily on Route 133 around Shediac Bay, a sub-basin of the Northumberland Strait. 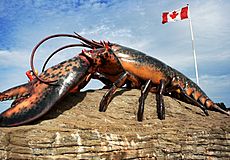 The town is located southwest and adjacent to the community of Pointe-du-Chêne which features Parlee Beach Provincial Park as well as the Pointe-du-Chêne wharf which was once the eastern terminus of the European and North American Railway as well as a stopover after 1939 for Pan-Am's trans-Atlantic "clipper" air service that featured large seaplanes. Imperial Airways flying boat service to Foynes, Ireland also used the facilities.

Hundreds of years ago, the Mi'kmaq encampment of "Es-ed-ei-ik" was one of the major camps in southeast New Brunswick. The Mi'kmaq word "Es-ed-ei-ik" which means "running far in" (in reference to the tide, which has a long range over the shallow, sandy beaches) eventually transformed into Gédaique.

Acadians first arrived at Shediac in 1749 as a result of the Acadian Exodus from peninsular Nova Scotia. During the French and Indian War, French officer Charles Deschamps de Boishebert made his headquarters at both Shediac and Cocagne, New Brunswick. In the autumn of 1755, Boishebert established himself on the south shore of Cocagne Bay, a place known as Boishebert's Camp. The following year, Boishebert moved to Miramichi, New Brunswick, specifically to Beaubears Island. After the war, Acadians returned to the region in 1767.

Today many Francophone residents use the spelling Shédiac; however, the town's name upon its incorporation did not feature an accented "e", and correspondingly the official geographic name for the community is Shediac.

All content from Kiddle encyclopedia articles (including the article images and facts) can be freely used under Attribution-ShareAlike license, unless stated otherwise. Cite this article:
Shediac Facts for Kids. Kiddle Encyclopedia.