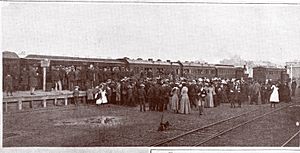 It was constructed in 1888 by the Great Southern Land Company.

It was a passenger railway station on the Western Australian Government Railways services until the end of the running of the Albany Progress in 1978.

It is often included in pictures of Stirling Terrace and of the jetties and facilities of the Port of Albany.

Following reduction in rail services, various proposals were investigated, and the railway station precinct was assessed for heritage status.

The station is both a heritage listed structure, as well as being a tourist information centre and Transwa bus terminal.

All content from Kiddle encyclopedia articles (including the article images and facts) can be freely used under Attribution-ShareAlike license, unless stated otherwise. Cite this article:
Albany railway station, Western Australia Facts for Kids. Kiddle Encyclopedia.