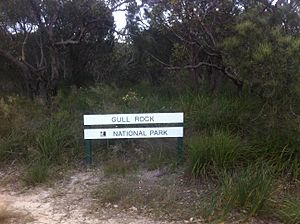 Signage at entry to park 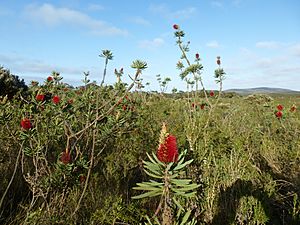 Melaleuca glauca habit in the park 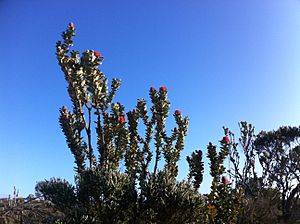 Banksia coccinea in the park

The area is backed by King George Sound to the south, Oyster Harbour to the west, Taylor Inlet to the east and farmland to the north. The park takes its name from a small island off Ledge Beach, which is not part of the park. Boiler Bay is at the eastern edge of Ledge Beach.

The Mount Martin Botanical Reserve is adjacent to the western boundary and Two Peoples Bay Nature Reserve is approximately 10 kilometres (6 mi) to the east of the park.

The area is an almost unspoilt example of coastal east Kalgan vegetation system. Composed of granite headlands separated by sandy beaches with lakes and interdunal wetlands, the area contains a number of specific ecosystems. Rocky granite areas exist, including Mount Taylor and Mount Martin, both of which are part of the Gardner Landform unit.

The diverse landforms and soils support an array of different habitats and a large number of floral species. A complex patchwork of forest, woodlands, wetlands, sedges, granite shrublands and coastal heath is found within the park.

Endangered species such as the noisy scrub-bird, western bristlebird and the western whipbird are known to inhabit the area. The endangered Western ringtail possum is also frequently sighted in the area.

Areas of banksia woodland, sheoak forest, open heath and grassed dunes can all be found within the park. Notable flora include Banksia coccinea, Hakea elliptica, Allocasuarina trichodon, Agonis marginata and Dryandra formosa. The area is home to the most significant remaining stands of scarlet banksia, Banksia coccinea, in the region, however this community is threatened by Phytophthora dieback.

The rare and ancient Main's assassin spider, currently listed as threatened, was found to inhabit the park during a survey conducted in 2008.

All content from Kiddle encyclopedia articles (including the article images and facts) can be freely used under Attribution-ShareAlike license, unless stated otherwise. Cite this article:
Gull Rock National Park Facts for Kids. Kiddle Encyclopedia.