Marree is a small town located in the north of South Australia. It lies 685 kilometres (426 mi) North of Adelaide at the junction of the Oodnadatta Track and the Birdsville Track, 49 metres (161 ft) above sea level. Marree is an important service centre for the large sheep and cattle stations in northeast South Australia as well as a stopover destination for tourists traveling along the Birdsville or Oodnadatta Tracks.

The area is the home of the Dieri Aboriginal people. At the 2011 census, the Marree census district which includes the entire northeastern corner of South Australia had a population of 634, with 70% of the population being male. The town of Marree has a population of approximately 150 persons. The major areas of employment are mining, agriculture and accommodation services.

The town was home to Australia's first mosque, which was made of mud brick and built by the Afghan cameleers employed at Marree's inception. At the turn of the 20th century the town was divided in two, with Europeans on one side and Afghans and Aborigines on the other.

The first European to explore the area was Edward John Eyre, who passed through in 1840. In 1859, explorer John McDouall Stuart visited the area, and his German botanist Herrgott discovered the springs which Stuart named after him. Initially the area was known as Herrgott (or Hergott) Springs but when the town was surveyed in 1883 4 km South of the springs in preparation for the coming of the railway it was given the name Marree. Marree is said to be derived from the indigenous word for possum. However the railway station itself was given the name Hergott Springs and the town remained known as such. The railway station's name was eventually changed to Marree in 1917 due to anti-German sentiment after World War I.

The historic Marree Hotel and Marree Fettlers' Cottages are listed on the South Australian Heritage Register.

Parts of The Inbetweeners 2, a 2014 British comedy film set in Australia, were filmed in Marree. 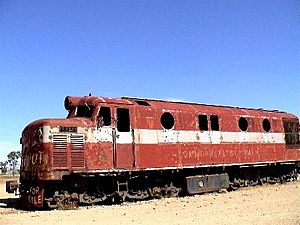 The Central Australia Railway reached the town in 1883 and the first train ran in January 1884. The town became a major railhead for the cattle industry. In the 1920s the railway was extended north from the town to Alice Springs. After opening in 1929 it became the route of the passenger train which became known as The Ghan. In 1957, a standard gauge line was built south from Marree on a flatter alignment to facilitate the movement of coal from Leigh Creek to Port Augusta. That made Marree a break-of-gauge on The Ghan service because the remainder of the line was still narrow gauge. In 1980 the narrow gauge line from Marree to Alice Springs closed when the Adelaide to Alice Springs line was rebuilt much further west. In 1986 the standard gauge line from Leigh Creek coalfields to Marree was closed and the town lost its railway connection completely.

Marree was also the home of Tom Kruse, one of the men who drove the mail trucks from Marree to Birdsville in Queensland, a distance of some 700 kilometres. This route crosses some of the most challenging sandy and stony desert country in Australia, and it was a remarkable feat for fully loaded trucks to make the run at all. A collection of hundreds of photographs, documents and memorabilia from Kruse's Birdsville mail run are on display at the Marree Hotel. 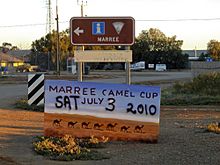 The name "Marree" was referred to briefly around the world when in 1998, a chalk figure etched into the landscape 60 km west of Marree was discovered, dubbed the "Marree Man". Calls were made to turn it into a state icon but the unimpressed local population preferred to let it fade naturally back into the landscape.

Like much of inland Australia, Marree has a very hot and dry climate in a desert environment. Temperatures above 40 °C have been recorded in every month between October and April and rainfall is extremely erratic, falling mostly in brief heavy downpours experienced 1-5 times per year, or when cold fronts in winter manage to penetrate far north enough into the Tirari Desert.

All content from Kiddle encyclopedia articles (including the article images and facts) can be freely used under Attribution-ShareAlike license, unless stated otherwise. Cite this article:
Marree, South Australia Facts for Kids. Kiddle Encyclopedia.