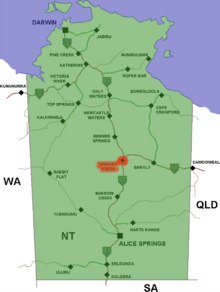 Tennant Creek is a small town in the Northern Territory of Australia, about 500 km north of Alice Springs and 1000 km south of Darwin. There are about 3,500 people living in the town. The area is part of the Barkly Tablelands, a large flat grassy plain the size of the United Kingdom, famous for its large cattle stations (farms). The first people to live in the area were the Warramunga people.

The explorer John McDouall Stuart was the first European to visit the area in 1860, but was attacked by warriors from the Warramunga at Attack Creek. In the battle at the creek, Stuart wrote that they "took steady aim" and fired their guns at the Warramunga, but he does not mention if any were killed or injured. Stuart named Tennant Creek after a John Tennant, of Port Lincoln, South Australia.

A repeater station for the Australian Overland Telegraph Line was built 11 km north of Tennant Creek in 1872.

There was a gold rush to Tennant Creek in 1930, Australia's last gold rush. Mining is still a major activity in the area, with gold, manganese and copper mines. In 2011 the Australian government proposed building a nuclear waste dump near the town despite protests from the traditional Aboriginal land owners. The traditional owners challenged the proposal in the Federal Court in June 2014, and the Northern Land Council dropped its plans.

All content from Kiddle encyclopedia articles (including the article images and facts) can be freely used under Attribution-ShareAlike license, unless stated otherwise. Cite this article:
Tennant Creek, Northern Territory Facts for Kids. Kiddle Encyclopedia.