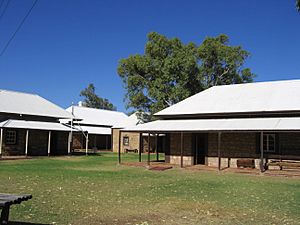 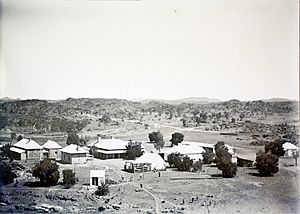 The Arrernte people of central Australia have inhabited in the Alice Springs region for thousands of years.

European exploration of central Australia began in 1860. John McDouall Stuart successfully crossed the continent from north to south on his third attempt in 1863. He passed through the MacDonnell Ranges through Brinkley Bluff, although the terrain was considered to be too rough for the Overland Telegraph Line. The site of the Alice Springs Telegraph Station was first recorded by surveyor William Mills in March 1871, who was in search of a suitable route for the line through the MacDonnell Ranges. While surveying, Mills came across a waterhole, which was a significant camping and ceremonial site for the local Aboriginal people. Known as Turiara, its creation story describes an old Arunga (euro) man walking along the river and scratching out the waterhole. Mills named it Alice Springs after Alice Todd, the wife of his employer Charles Todd, the head of the overland telegraph project at the time.

Construction of the telegraph station began adjacent to the waterhole in November 1871 under the supervision of Gilbert Rotherdale McMinn. A number of structures were eventually built, including a harness room, buggy shed, police station, blacksmith's workshop, telegraph office, kitchen building and station master's residence. Supplies arrived from Adelaide just once per year, so self-sufficiency was critical. Stockyards and a large garden area were also developed. While the waterhole supplied the settlement with water, a well was later sunk to maintain supply during drought periods.

After completion, the telegraph station operated for 60 years. 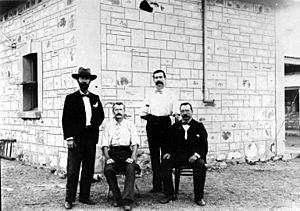 Mueller, the first postmaster, became Warden of Goldfields. He was dismissed from the role on 25 July 1906. He was later found guilty of embezzling £42 at Arltunga on May 4 1905 and sentenced to six months in Port Augusta Gaol. Mueller Street in East Side, Alice Springs is named after him.

Bradshaw (1859 – 28 August 1934), joined the Post and Telegraph Department in 1878. He worked as a telegraph operator in Adelaide before being appointed postmaster of the Alice Springs Telegraph Station on 1 April 1899. Bradshaw sued the Commonwealth in 1925 for wrongful dismissal in the High Court of Australia. Bradshaw Primary School in Alice Springs is named after him.

The station closed in 1932 following the construction of a new post office. It was then used as an institution for 'half-caste' Aboriginal children known as The Bungalow which was moved there from Jay Creek. An area of 273 hectares (670 acres) including the telegraph station was proclaimed an Aboriginal reserve by the Department of Native Affairs on 8 December 1932. Its purpose was to provide residence and education services to part-Aboriginal children ("half-castes").

The Freemans were the first Superintendent and Matron at the new location. It closed in 1942 when children were evacuated south in response to World War II. The majority of the children from the institution were sent south to Mulgoa in New South Wales and Balaklava in South Australia. The buildings were taken over by the Australian Army.

During World War II parts of the station were used by the Australian Army between 1942 and 1945. It was used as the Native Labour Headquarters. It was returned to the Native Affairs Department in 1945 after the war. The station became an Aboriginal Reserve until 1963, when many Aboriginal people moved to Amoonguna, an Aboriginal Community southeast of Alice Springs.

The station is on land proclaimed as a reserve on 5 June 1962 and now part of the Alice Springs Telegraph Station Historical Reserve. A number of stone buildings have now been restored. The historical reserve was listed on the now-defunct Register of the National Estate in 1980. It was listed on the Northern Territory Heritage Register on 19 April 2004. It is now operated as a tourist attraction, cafe and mountain biking destination.

All content from Kiddle encyclopedia articles (including the article images and facts) can be freely used under Attribution-ShareAlike license, unless stated otherwise. Cite this article:
Alice Springs Telegraph Station Facts for Kids. Kiddle Encyclopedia.