Sichuan (Chinese: 四川; pinyin: Sì Chuān) is a province in western China with its capital at Chengdu. It is also informally called 蜀 (pinyin: Shǔ). Its Governor is Wei Hong and its CPC Ctte Secretary is Wang Dongming. With a population of 87,250,000 (2006), Sichuan is the third most populated administrative division of China. Sichuan used to be the province with the most people in China before Chongqing was separated from it, making Henan the most populous. However, when including migrants, Guangdong has more people than Henan.

There are 18 subdivisions within Sichuan, including both prefecture-level cities and autonomous prefectures: 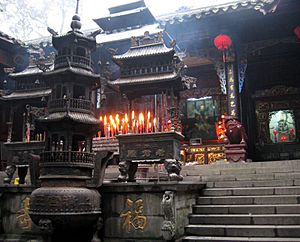 A pavilion of the Shangqing Temple (Taoist) in Qingchengshan, Chengdu. 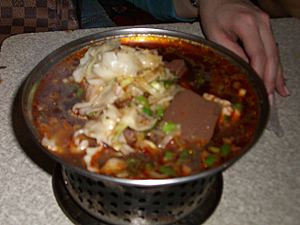 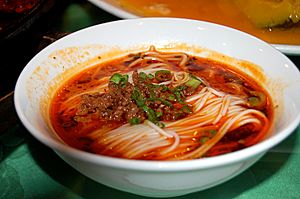 Most people living in Sichuan are Han Chinese. There are also Tibetans, Yi people, Qiang and Naxi in the western side.

The Li Bai Memorial (located at his birthplace, Zhongba Town of northern Jiangyou County) is a museum in memory of the Chinese poet of the Tang Dynasty, Li Bai. It was prepared in 1962 on the occasion of 1,200th anniversary of his death, completed in 1981 and opened to the public in October 1982. The memorial is built in the style of the classic garden of the Tang Dynasty.

Sichuan has a long history of folk and classical music. Sichuan opera is an ancient tradition that very is well-known. The Sichuan lantern drama is popular in Sichuan. The Sichuan Conservatory of Music in Chengdu is one of the oldest of musical education in China, having been established in 1939.

There is also religious music in Sichuan, played by Taoist priests in their temples.

Traditional Sichuan folk music is usually played with instruments such as the bamboo flute, pan and cymbals, gong and horn.

Sichuan cuisine has an international reputation for being hot and numbing (Chinese: 麻辣), because of the common ingredient of the Sichuan peppercorn (Chinese: 花椒).

Most dialects of the Chinese language spoken in Sichuan, including the Chengdu dialect, are similar to the dialects of neighbouring provinces Yunnan, Guizhou and Chongqing Municipality.

All content from Kiddle encyclopedia articles (including the article images and facts) can be freely used under Attribution-ShareAlike license, unless stated otherwise. Cite this article:
Sichuan Facts for Kids. Kiddle Encyclopedia.